February is generally a slow month — who comes to a New England seaside resort in the dead of winter? — but the month just past brought five good ones: Oklahoma, Illinois, Alabama, Tennessee, and Texas. Texas actually showed up earlier in the month, but it’s common enough that I forgot it was a first sighting and didn’t write it down.

Oklahoma and Alabama didn’t show up till June last year, and Oklahoma has been known to not show up at all. The Oklahoma plate was on a Budget rental truck. I saw it first at the West Tisbury library, and a week or so later at (IIRC) M.V. Wine & Spirits (aka “the beer store”). Alabama used to be one of the rarer ones, though never as rare as neighboring Mississippi, but in February I saw two different Alabama plates. I suspect at least one of them belongs to someone who’s living here long term.

The map so far reminds me of a pinto pony, with spots scattered across the nation’s midsection. Most years the coasts fill in early on then the color starts spreading into the middle. The states left white when the year runs out generally include the stack north of Oklahoma and the one anchored by Louisiana on the south end. 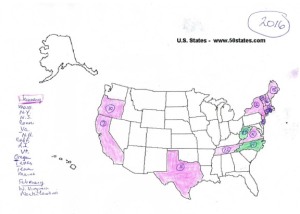 Here’s last February’s map for comparison. The relatively early arrivals of Ohio, Illinois, Iowa, and Colorado make a big difference in how the map looks.

I’ve been wondering where Pennsylvania was hiding, but I see it didn’t show up till March last year. I’ll go out on a limb and predict it’ll do the same in 2017.

I also expect to see D.C., both Carolinas, Georgia, Oregon, and maybe Washington state before the month is out. We’ll see how it goes.

Susanna edits for a living, writes to survive, and has been preoccupied with electoral politics since 2016. She just started a blog about her vintage T-shirt collection. Her other blogs include "From the Seasonally Occupied Territories," about being a year-round resident of Martha's Vineyard, and "Write Through It," about writing, editing, and how to keep going.
View all posts by Susanna J. Sturgis →
This entry was posted in license plates and tagged license plates. Bookmark the permalink.