As part of a beginners’ guitar class I’m taking at the West Tisbury library (more about that later), I’ve been practicing “Rudolph the Red-Nosed Reindeer.” It’s got a challenging chord transition (Em -> A7 -> D) so I’ve been practicing it a lot, which is to say I’ve been paying more attention than usual to the words.

What a nasty song! Obnoxious reindeer bully the different one then suck up to him when he gets in good with the boss?

This sounded oddly contemporary, so I wrote some new lyrics:

Donald the big-mouth con man had some very orange hair
and if you ever saw it, you would have to stop and stare
All of the other Repubs used to laugh and call him names
They never let poor Donald join in any Repub games

Then one murky ‘lection year Putin came to say
“Donald, we are quite a pair, I don’t mind your orange hair”
Then how the Repubs loved him ’cause he bested Hillary (sorta)
Donald the big-mouth con man you are still a travesty.

Pass it on. Maybe if it goes viral enough, Orangino will trash me on Twitter. 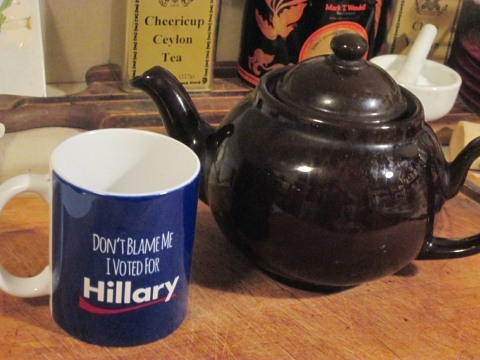 Susanna edits for a living, writes to survive, and has two blogs going on WordPress. "From the Seasonally Occupied Territories" is about being a year-round resident of Martha's Vineyard. "Write Through It" is about writing, editing, and how to keep going. She also manages the blogsite for the Women's Committee of We Stand Together / Estamos Todos Juntos, a civic engagement group on Martha's Vineyard.
View all posts by Susanna J. Sturgis →
This entry was posted in music and tagged election 2016, music, West Tisbury Free Public Library. Bookmark the permalink.