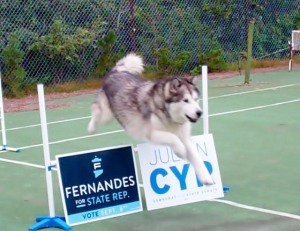 Knocking on strangers’ doors is way out of my comfort zone. I’m a written-word person after all. However, I’m excited by the caliber and the potential of both these guys. I’d already given money, put up flyers, sent emails, and worn out my Facebook friends with shares and cute dog pictures. Maybe there was something else I could do?

I’ve also got Eleanor Roosevelt’s words firmly embedded in my memory for those times when I’m afraid that I’m unequal to the task or that the task will blow up in my face. “You must do the things you cannot do,” she said. And “You gain strength, courage, and confidence by every experience in which you really stop to look fear in the face.”

Both Fernandes and Cyr are running grassroots campaigns that emphasize one-on-one contact with the citizens they aspire to represent.  They’re knocking on doors and appearing regularly at house parties. They’re emphasizing two-way communication, listening as well as talking. Most campaign methods are strictly one-way, like speeches, rallies, TV and radio and newspaper ads, and robocalls.

Going door to door becomes less and less feasible as the size of the district increases. In large cities, states, and the whole USA it’s pretty much impossible.

But the average state senate district in Massachusetts contains 163,691 citizens (according to 2010 census figures) and the average house district 40,923. (Figures from Ballotpedia, where it’s much easier to find Massachusetts election-related info than on the Mass.gov site. Go figure.) Last I heard, Fernandes et al. had knocked on some 3,000 doors on the Vineyard alone and well over 7,000 in the district as a whole.

This is impressive enough in itself, but the Barnstable Martha’s Vineyard Nantucket district has to be the most geographically challenging in the commonwealth because it comprises two islands and a chunk of the mainland. The issues that confront us are similar in so many ways, but getting from one place to another is daunting enough that most of us on the Vineyard have little contact with Nantucket, and Falmouth is the local equivalent of a flyover state: we drive through it on the way to somewhere else. The relative dearth of personal connections leads to the mutual suspicion I blogged about last month in “Ballot Box Exceptionalism.”

In this particular election year, the word “campaign” provokes groans and eye rolls and heartfelt wishes that it were over yesterday. But what’s going on in this district — and I bet in many others across the state and the country — is cause for celebration. “Campaign” derives from the military: its roots mean field, open country, battlefield. It’s now understood more generally. Says the American Heritage Dictionary: “An operation or series of operations energetically pursued to accomplish a purpose.”

Especially on the local level, a political campaign can accomplish so much more than getting a worthy candidate elected to public office. In addition to introducing the candidate to the people, it introduces the people to the candidate. It fosters a two-way communication that can continue long past the counting of ballots if “we the people” do our bit to keep the conversation going. Often we don’t, then we blame the officeholder for being out of touch.

Playing a bit part in this effort was enough to push me out of my comfort zone, and you know what? I wasn’t bad at it, and it wasn’t all that scary. 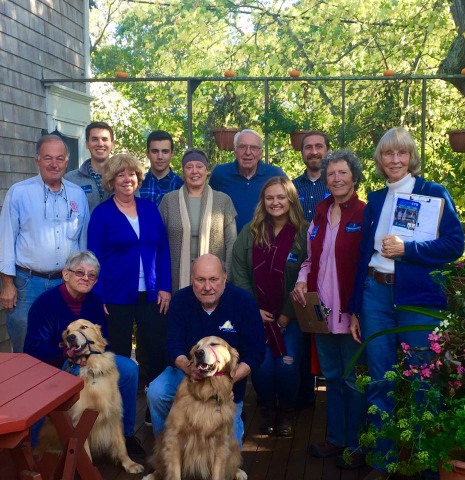 Canvassers about to hit the streets of Oak Bluffs. I’m second from the right. Dylan Fernandes is at the far left of the back row. Campaign manager Amaury Dujardin isn’t in the photo because he took it.

Susanna edits for a living, writes to survive, and has been preoccupied with electoral politics since 2016. She just started a blog about her vintage T-shirt collection: "The T-Shirt Chronicles." Her other blogs include "From the Seasonally Occupied Territories," about being a year-round resident of Martha's Vineyard, and "Write Through It," about writing, editing, and how to keep going.
View all posts by Susanna J. Sturgis →
This entry was posted in musing, public life and tagged election 2016, Oak Bluffs, politics, risk. Bookmark the permalink.