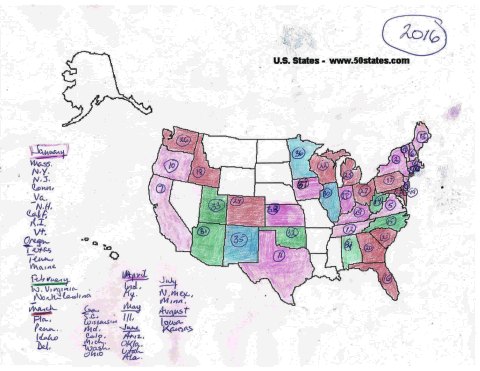 Iowa and Kansas both showed up in August, good ones both, especially for August. Vineyard roads are jammed in August — most years it’s all anyone talks about, though this year the lack of rain and the presidential election are in the running — but the hard-to-get license plates are no easier to spot, maybe because I’m staying off the roads as much as possible.

I spotted Iowa, I think it was, right outside the Oak Bluffs post office one afternoon as I walked from Reliable Market to my car in Ocean Park. I did a double-take because that’s a loading zone part of the day so usually all the vehicles illegally parked there have Massachusetts plates on them.

Parking in downtown Oak Bluffs can be a bear in the summer. The parking lot at Reliable is small and often full. Circuit Ave. and Kennebec are generally jammed, and the traffic that’s always on one’s tail makes one reluctant to pause when some car’s brakelights come on, signaling it’s about to vacate its spot. Some people I know do their grocery shopping in pairs — one to shop and one to drive around and around until either a parking place is found or the shopping is done, whichever comes first. I’ve had very good luck with the 15-minute spots on Ocean Park. It might take me as many as 20 minutes to walk briskly to Reliable, do my shopping, and carry my bags back again,, but I haven’t been ticketed yet.

Susanna edits for a living, writes to survive, and has been preoccupied with electoral politics since 2016. She just started a blog about her vintage T-shirt collection: "The T-Shirt Chronicles." Her other blogs include "From the Seasonally Occupied Territories," about being a year-round resident of Martha's Vineyard, and "Write Through It," about writing, editing, and how to keep going.
View all posts by Susanna J. Sturgis →
This entry was posted in license plates and tagged license plates, summer, traffic. Bookmark the permalink.