Vineyarders packed the Grange Hall yesterday, on a sweltering August afternoon, to hear candidates for the state senate and the state house of representatives introduce themselves at a forum organized by the League of Women Voters. Neither State Senator Dan Wolf nor State Rep Tim Madden is running for re-election, so the field is crowded: four — two Democrats and two Republicans — vying for the nod of their respective parties in the senate race, and five Democrats competing for the house nomination plus two who, running as Independents, get to bypass the September 8 primary and go straight to the November ballot.

A sampling of campaign lit for candidates at the forum

The good news is that they’re a well-qualified lot. Even better, several of the candidates are young — in or not far out of their twenties — and even the youngest already have several years of solid experience behind them.

The not-so-good news is that you can only vote for one in each race, and only one will be elected.

I’m not going to do a blow-by-blow — Lynn Christoffers was there recording for MVTV (Martha’s Vineyard Community Television) and the whole thing should be up on their video on demand page shortly — but here’s the basic format.

The state senate candidates took the stage first. The Cape and Islands state senate district includes the Vineyard, Nantucket, and the mid and lower (outer) Cape. Interestingly enough, it doesn’t include Woods Hole and the rest of Falmouth, which are part of the Barnstable, Dukes, and Nantucket house district. The State Senate comprises 40 seats, each representing about 169,000 people.

Each candidate got three minutes to introduce him- or herself, then moderator Deborah Medders posed three questions, which each candidate answered in turn. The questions were about (1) sustaining the shellfishery (very important here — it’s a coastal district), (2) the heroin-opioid epidemic, and (3) preparing for climate change. Each question came with enough background information to give audience members an idea of what was going on with each issue even if they weren’t following it closely. The candidates all knew the questions in advance. Then each candidate gave a one-minute wrap-up, probably 10% of which went to thanking the League of Women Voters for sponsoring the forum and the audience for turning out on a hot and humid summer afternoon.

The Grange isn’t air conditioned, by the way, but the windows were open, and by 5:30 or so the occasional cooler breeze was wafting through.

When the candidates for the house stepped up, the stage was considerably more crowded. Their portion of the program followed the exact same format. The state house of representatives has 160 members, each of whom represents about 40,000 constituents. The Barnstable, Dukes, and Nantucket district comprises the Vineyard (which makes up most of Dukes County, or the County of Dukes County as it’s officially called), Nantucket, and most of Falmouth. It may contain the same number of citizens as the other districts in the commonwealth, but it has to be the hardest to get around. Dylan Fernandes has astonished several of my friends by knocking on their hard-to-find doors to introduce himself and his candidacy. (Yeah, I’m supporting this guy. 🙂 ) 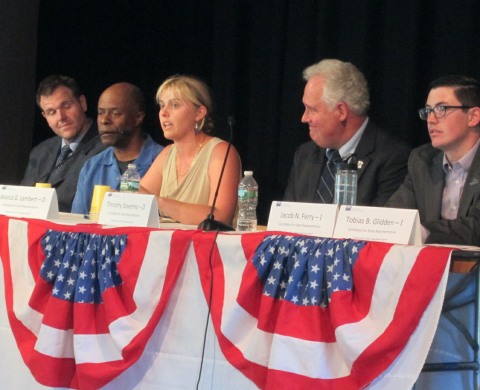 Candidates for the house seat in the Barnstable, Dukes, and Nantucket district, from left: Democrats Michael Heylin, Ewell Hopkins, Jessica Lambert (speaking), and Timothy Soverino, and Independent Jacob Ferry. Offstage left is Democrat Dylan Fernandes; offstage right is Independent Tobias Glidden. I told you the stage was crowded, didn’t I?

Candidates who didn’t have to run for the boat hung out afterward to answer and ask questions. Others were represented by members of their respective teams.

Against a lengthy presidential campaign that’s been playing out for months like a violent thunderstorm in the distance or right overhead, this was so refreshing. Imagine: Listening to the candidates unscripted, with no intermediaries deciding what you get to hear and how much of it! Then having the opportunity to ask your own questions, one on one. Seven of the candidates are running as Democrats, two as Republicans, and two as Independents, but party affiliation took a back seat as all of them addressed issues of pressing concern to the Cape and Islands region — issues that in most cases have affected them personally.

When many of us hear the word “government,” we think immediately of Congress and the White House, and maybe the statehouse — in Massachusetts it’s familiarly referred to as Beacon Hill, where the governor sits and the General Court (i.e., the state senate and the state house of representatives) convenes. It’s Them, it’s a monolith, it’s only interested in Us when it wants our votes.

To meet and listen to the candidates, all of whom have been doing the unheralded work of “government” on various levels, some for many years — it changes one’s perspective a bit. And the caliber of these candidates is genuine cause for rejoicing.

Once upon a time, Martha’s Vineyard and Nantucket were each a single district, so the state house of representatives always included one member from each island. When the house was shrunk from 240 members to 160 in the mid-1970s, this came to an end. This provoked a (fairly) good-natured SECEDE NOW movement on the islands. I still have the T-shirt.

Susanna edits for a living, writes to survive, and has been preoccupied with electoral politics since 2016. She just started a blog about her vintage T-shirt collection: "The T-Shirt Chronicles." Her other blogs include "From the Seasonally Occupied Territories," about being a year-round resident of Martha's Vineyard, and "Write Through It," about writing, editing, and how to keep going.
View all posts by Susanna J. Sturgis →
This entry was posted in Martha's Vineyard, public life and tagged Dukes County, election 2016, politics, West Tisbury, year-rounders. Bookmark the permalink.