The stretch of bike path Trav and I walk every day changes with the season, the weather, and the time of day, but the other day we encountered something new behind the Nat’s Farm subdivision.

A big, blue, very round disk with diameter the width of the bike path. It was marked off with orange cones and the yellow “do not cross” tape you see at crime scenes and construction sites.

Further up the bike path, not far from the big field at Misty Meadows, “NEP” was painted on the asphalt in big white block letters.

On our next morning’s walk, Trav’s and my route took us through the state forest parking area across from the West Tisbury School. 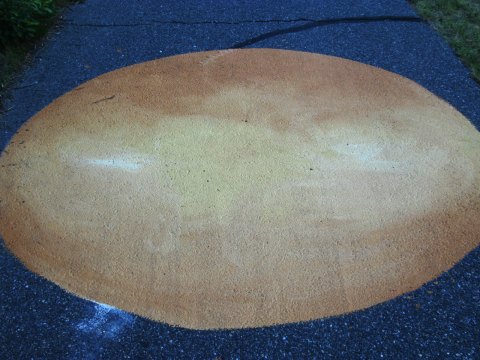 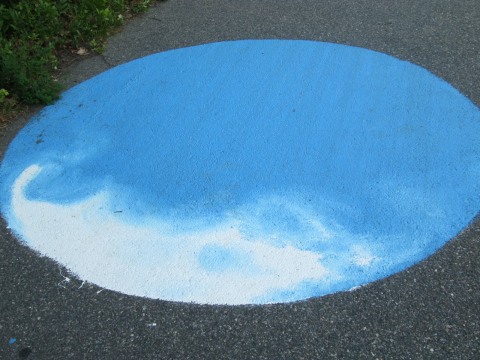 Finally I got it: planets!

That mysterious “NEP” at the other end had to stand for Neptune. And sure enough, the very next morning, several kids and their teacher were at work painting another big blue disk. I admired their work. They admired Travvy. I kept Trav from making pawprints on the still-wet paint.

A couple of days later the teacher (well, the supervising adult — I don’t know for sure that she’s a teacher) was out there alone with white paint and big handmade stencils. The plan was clear and becoming clearer. I admired the stencils and added that I’d stencilled a few sidewalks in my day but never anything this big. Doing it all by hand was harder than doing it digitally, we agreed. (In retrospect I’m thinking: Doing it by hand involves using one’s fingers, so isn’t that “doing it digitally” too?) It was a nice day to be outside, she said.

The stencilling isn’t quite done, but from Mars through Neptune each planet’s distance from the sun is in place. 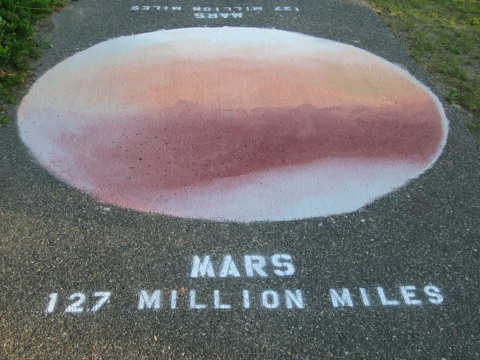 “You know, it’s more than a billion miles from Uranus to Neptune?” I tell Trav as we walk the distance in a minute or so.

Here’s the sun from which all those planets are distant:

And here’s my walking buddy sitting on top of the world.

Susanna edits for a living, writes to survive, and has two blogs going on WordPress. "From the Seasonally Occupied Territories" is about being a year-round resident of Martha's Vineyard. "Write Through It" is about writing, editing, and how to keep going. She also manages the blogsite for the Women's Committee of We Stand Together / Estamos Todos Juntos, a civic engagement group on Martha's Vineyard.
View all posts by Susanna J. Sturgis →
This entry was posted in outdoors and tagged arts, Travvy, walking, West Tisbury School. Bookmark the permalink.

9 Responses to Strolling Between Planets