. . . but today most of it melted. My ice disk quartet was completely snowed under for two days. This is what it looked like this morning: 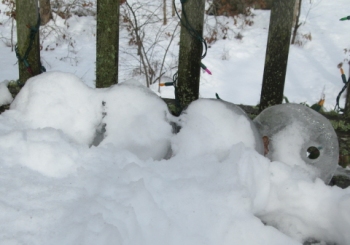 And this is what was left a little after noon:

When Travvy and I went out walking on Saturday morning, a light dusting of snow created subtle patterns on the ground. 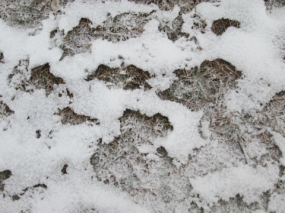 Then it snowed and snowed all day long till there was about a foot of snow on my deck. Four inches makes it almost impossible to open my front door, so from time to time I interrupted my work to get out there with a shovel.

It was still snowing and pretty damn dark when Trav and I went out exploring. Since my nearest neighbors were away and I (of course) don’t have a cell phone, at 4:45 I posted on Facebook that we were going for a walk and if I didn’t check in within an hour or so to notify one of the more distant neighbors to send out a search party.

Well! It was tough going out there. My car was totally buried. The snow was heavy, heavy and wet. Many trees and limbs were bent way over with snow, like this:

Off in the woods I heard trees cracking. The path I usually take along the Dr. Fisher Rd., to avoid the worst puddles (aka lakes), was blocked by one tree after another. I kept detouring around the trees and pretty soon I was on a side road I didn’t recognize. Hmm. It is really easy to get turned around in the snow and dark. Intellectually I knew that no matter what direction I walked in, I’d hit a road eventually, but the idea of slogging an extra two or three miles on a night like this was not attractive. 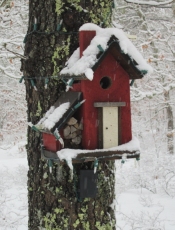 Then I spotted the distinctive house marker (see photo at left) at the end of one neighbor’s driveway, so I knew where I was. After that it was slog slog slog along the path that winds behind the West Tisbury School. I hollered at whoever was blowing snow at another neighbor’s house, but the snow blower was too loud and nobody heard me.

Trav likes to do his business way off in the woods, but I told him no way were we going so far that I couldn’t see some house lights. He humored me. We made the first tracks on Halcyon Way. No surprise there: what other idiots would be out in this?

When I checked back in on Facebook, it was about an hour since I’d left. Two friends in Australia were seriously thinking of contacting my neighbors.

Sunday was dig-out day. I secretly like shoveling, so I shoveled my neighbors out as well as myself and Malvina Forester. My neighbor has shoveled me out more than once. I think he secretly likes shoveling too.

Halcyon Way didn’t look like anything would ever drive down it again . . .

but DECA showed up around noon and cleared both the road and the driveway. I could go anywhere, but where was there to go? Writers’ group was cancelled because there was nowhere to park at Cynthia’s. Last year the big snow of late January hung around and around and around. The writers’ group met at the library once or twice. Cynthia’s annual Groundhog Day party had to be cancelled for the first time in 25 years because there was nowhere to park in the driveway, the back field, or alongside the road.

Looks like it’ll be a go for this year. Whether the groundhog will see his or her shadow, who knows?

Susanna edits for a living, writes to survive, and has been preoccupied with electoral politics since 2016. She just started a blog about her vintage T-shirt collection: "The T-Shirt Chronicles." Her other blogs include "From the Seasonally Occupied Territories," about being a year-round resident of Martha's Vineyard, and "Write Through It," about writing, editing, and how to keep going.
View all posts by Susanna J. Sturgis →
This entry was posted in outdoors and tagged Facebook, my neighborhood, snow, walking, winter. Bookmark the permalink.

5 Responses to Yes, It Snowed