Fall Comes to the Closet

A few short (and ever-shortening) days after fall comes to the clothesline, it’s time for the semiannual Great Seasonal Clothes Swap. I live in a studio apartment. Both closet space and drawer space are limited. Off-season clothes live in the closet in two big plastic containers.

Right: Winter clothes coming out of hiding. Left: Summer clothes going in. The storage boxes are underneath. My clothes piles are not that big.

The swap is enough of a hassle that a week or two or three generally pass between “it’s probably time” and “it really is time.” My bed is the main transfer station for clothes moving out of and into the boxes. If the swap isn’t accomplished in one day, I can’t go to bed.

Travvy can’t nap on the bed either. Travvy is the reason why no matter which direction the clothes are moving in, most of them have dog fur on them.

In case anyone’s wondering why all my clothes are garnished with fur . . .

On Sunday I realized that I was wearing my last pair of jeans. I hadn’t worn shorts for almost two weeks. Short sleeves had given way to long. I was wearing turtlenecks again. The time had most definitely come.

I wear out my turtlenecks. I wear out my jeans. I don’t wear out my long-sleeved shirts because I don’t wear them that often. Shirt cuffs have to be unbuttoned and rolled up before I can do the dishes, wash the car, dig in the garden, or do anything else that might get my hands (and probably my wrists and forearms) dirty and/or wet. With turtlenecks, sweatshifts, and sweaters, I can push the cuffs back to my elbows and get on with it.

I acquired a bunch of long-sleeved shirts back when I worked for the Martha’s Vineyard Times and had this idea that I shouldn’t wear the same clothes, especially the same shirt, five days in a row. I left the Times 16 years ago, and some of my shirts are a good deal older than that — and still in good condition because (you guessed it) I don’t wear them much.

During the Great Seasonal Clothes Swap I confront myself: OK, Susanna, you really like this shirt, but you never wore it last winter or probably the winter before that, and it’s highly unlikely you’ll wear it this one either. If you were a shirt, how would you feel about spending all your time either in the closet or in a box?

Shirts in waiting to go off to the Dumptique

So on Tuesday, a dump day in my town, I took four shirts on their wire hangers to the Dumptique, which is a 5- or 10-minute walk from where I live. Fare well, shirts. Here’s hoping you’ll find someone who’ll let you out of the closet once in a while. Maybe I’ll see you around town.

The other question that comes up during the Clothes Swap: How tatty does a turtleneck have to be before I throw it out?

The answer is “Pretty damn tatty.” Most of my turtlenecks have frayed cuffs and frayed necks. Some of them also sport little gaps in the seam or holes in the fabric. Still wearable, say I. I usually wear turtlenecks under something else, a shirt, a sweatshirt, or a sweater. I do like to have a couple of unfrayed T-necks in the closet at all times, in case I have to go somewhere people notice these things.

Add that to the “10 Reasons Why I Like Living on Martha’s Vineyard”: Here, if people notice that your cuffs are frayed or your sweater has holes in it, they generally won’t say anything. On the other hand, when I go out in a skirt or, gods forbid, a dress, someone will invariably stare as if they’ve just seen a two-headed cat. On the whole I think it’s good not to be too predictable. 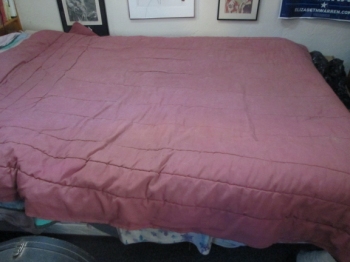 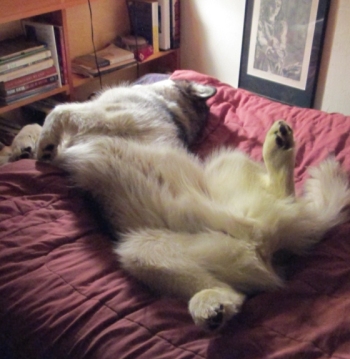 Susanna edits for a living, writes to survive, and has been preoccupied with electoral politics since 2016. She just started a blog about her vintage T-shirt collection: "The T-Shirt Chronicles." Her other blogs include "From the Seasonally Occupied Territories," about being a year-round resident of Martha's Vineyard, and "Write Through It," about writing, editing, and how to keep going.
View all posts by Susanna J. Sturgis →
This entry was posted in home and tagged clothes, Dumptique, fall, procrastination, Travvy. Bookmark the permalink.

4 Responses to Fall Comes to the Closet