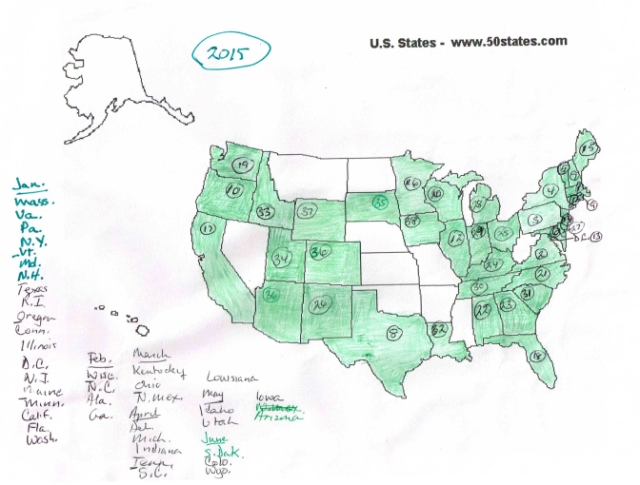 A good month for the West and Midwest: South Dakota, Colorado, Wyoming, Iowa, and Arizona.

South Dakota and Iowa never did show up last year, so snagging them both in June is a minor coup. I had a strong assist on South Dakota. Cynthia Riggs, mystery writer, gardener, and co-proprietor of the Cleaveland House B&B, tipped me off that B&B guests here for Virginia Blakesley’s memorial service had South Dakota plates on their car and would be around till Wednesday. I showed up for writers’ group on Sunday night and there it was in the driveway.

About the booboo in the list: I spotted New Mexico, wrote it down, realized I already had it, and noticed that I hadn’t recorded Arizona yet, although I’d seen at least three of them. Being a chronic East Coast girl, I have to think hard to recall whether Arizona is the one on the right or the one on the left.

Same deal with Wyoming and Colorado: Which one’s on top and which one’s on the bottom? When I recorded Wyoming, I saw that Colorado was still blank, though I’d spotted several. Colorado is not uncommon; my theory is that a some people, either seasonal residents or transient workers follow the snow westward then come back east for the summer.

Hmm. Just noticed a goof in the numbering. Arizona is 39, not 36. Will fix that PDQ.