Out of Sight? Not Quite

I lived in Washington, D.C., for 11 years and loved it. All those years I hardly ever thought about where my drinking water came from or where my trash or sewage went.

All that changed after I landed on Martha’s Vineyard in the mid-1980s. Before long, the phrase “sole-source aquifer” had entered my working vocabulary. An aquifer, says the American Heritage Dictionary, is “an underground layer of permeable rock, sediment, or soil that yields water.” “Sole-source” means there’s only one of them. All the drinking water on Martha’s Vineyard comes from that one aquifer. Screw it up and we’ll be importing water from the mainland. Sort of puts environmental squabbles in perspective, doesn’t it?

A very hot topic at the time was the formation of the Martha’s Vineyard Refuse Disposal and Resource Recovery District (MVRDRRD — the acronym resists pronunciation so successfully that it’s generally referred to as “the District”). Within a year or so, I was talking trash like I knew what I was talking about.

“Refuse” means “trash.” “Resource recovery” means recycling. A big issue was what to do with the trash that couldn’t be recycled and was filling up the six town dumps, which we were supposed to call “landfills.” Once the decision was made to ship the nonrecyclables off to SEMASS, the big incinerator in Rochester (Mass.), the landfills officially became “transfer stations,” but nearly everyone I know still takes their trash to the dump. The recycling shed at the West Tisbury dump is the Dumptique. “Landfill-tique” and “transfer-station-tique” are almost as unsayable as MVRDRRD.

“Refuse” doesn’t include sewage, but within a few years I had a nodding acquaintance with that subject too. The downtown areas of the down-island towns — Vineyard Haven, Oak Bluffs, and Edgartown — are now “sewered,” but most Vineyard residences and businesses have their own septic systems. Those septic systems are underground and out of sight so in theory it would be easy to forget about them, but in practice it isn’t because they come up in conversation a lot. Someone is always having their septic tank pumped out; a former hairdresser’s husband is in the pump-out business; and when you hear that so-and-so is dealing with a failed septic system, you offer your condolences.

Here’s a handy guide to how septic systems work.

So when my neighbor-landlords had to have a new septic put in, I offered my condolences, but I also had a great view from my deck. John Keene’s crew and their machines arrived last Thursday. Here some of what I saw.

This is just the beginning. Watching the interaction among the men on the site made me wish I didn’t work solo. The precision of the big excavator is as impressive as its power. When it shook the dirt off the huge stump it had just pulled from the ground, it reminded me of Travvy shaking a squeaky toy. But it also plucked shrubs and small trees up so delicately that they could be replanted when the job was done.

I want to be a heavy equipment operator when I grow up.

Excavator at the brink

All that dirt had to go somewhere. Some of it came back later. The contractor’s shop is just up the road — close to my town’s dump, as a matter of fact — so it didn’t have far to go.

Half of the concrete container that will hold our wastewater and sewage is lifted into place. Behind the excavator and off to the left you can see the deck I watched the proceedings from — when I wasn’t circling the lawn to get a better angle. My internet and phone were disconnected for the duration — the cable crosses the lawn that was now a big pit — so while the work was under way I made several trips next-door to use my neighbors’ wi-fi.

Having watched the excavator uproot a huge stump and shake it like a dog’s toy, I did not want it to go after the little building I live in. My apartment is on the second floor. My bathroom, whose services are being improved by the new septic, is on the first. Luckily the companions of the big beast have trained it well. 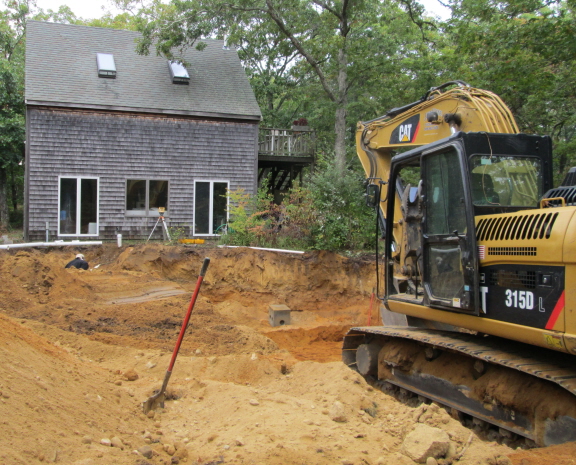 Most of the cement tank is now underground. See those R2D2-looking creatures on top? That’s how the tank can be pumped out without digging up the lawn again.

Before the hole can be filled in, the town’s health agent has to inspect the new system and give his approval. Here John Powers checks out the dimensions of the distribution area. Note relative size of person and pit.

Now the dirt comes back, some of it anyway. The hole is filled in, the surface graded, and the small trees and shrubs replaced in their original locations. The machine that chews big stumps like candy is astonishingly delicate when it comes to smoothing and replanting.

Before the digging started, a couple of frogs lived in a little plastic pond above where the cement tank now is. One of the girls next door has been asking her parents for a bigger pond. The new pond is bigger than anyone expected. There’ll be room for more than frogs in this one.

Now I can’t pass by a yard without wondering what’s underneath it. Out of sight, yes, but not quite out of mind. See why I’d have a hard time moving back to the big city?

Susanna edits for a living, writes to survive, and has two blogs going on WordPress. "From the Seasonally Occupied Territories" is about being a year-round resident of Martha's Vineyard. "Write Through It" is about writing, editing, and how to keep going. She also manages the blogsite for the Women's Committee of We Stand Together / Estamos Todos Juntos, a civic engagement group on Martha's Vineyard.
View all posts by Susanna J. Sturgis →
This entry was posted in home, Martha's Vineyard, technology and tagged Dumptique, ecology, island economics, my neighborhood, politics, Washington DC. Bookmark the permalink.

4 Responses to Out of Sight? Not Quite