One of the joys of my life is singing in the U.S. Slave Song Project Spirituals Choir. Directed by project founder Jim Thomas, we sing songs sung by African slaves in the American colonies and the United States from 1619 till Emancipation was complete in 1865. These are true folk songs. None of them were composed.

We sing them at senior centers, libraries, churches, restaurants, and schools. Each summer we do one concert at Katharine Cornell Theatre in Vineyard Haven and another at Union Chapel in Oak Bluffs. We sing at the East Chop Lighthouse every Della Hardman Day.

These songs are powerful. They pull you into the lives of the people who sang them first. Jim has been researching slave songs for a long time. At our presentations he talks about how the songs developed and spread, and how most of them carry at least two levels of meaning, one for the powerful white folk in the vicinity, the other for the slaves themselves. The songs draw on stories and imagery from the King James Version of the Christian Bible, but they aren’t, strictly speaking, religious. “Jesus” in the spirituals can be anyone who helped the slaves. “Satan” is anyone who treated them cruelly.

So yesterday Jim and more than 20 members of the choir made our way via chartered bus first to Boston, where we sang at the historic Old North Church, and then to Medford, where we sang at the Royall House and Slave Quarters museum — a truly remarkable place. Its goal is similar to ours: to bring alive the daily life of African slaves in this country. 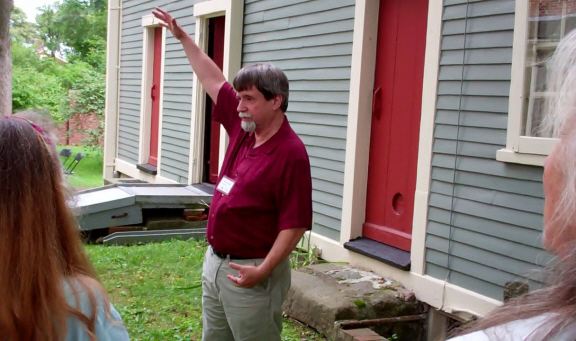 Tom Lincoln, executive director of the Royall House and Slave Quarters, gave us a tour before we sang. That’s the Slave Quarters in the background.

Susanna edits for a living, writes to survive, and has two blogs going on WordPress. "From the Seasonally Occupied Territories" is about being a year-round resident of Martha's Vineyard. "Write Through It" is about writing, editing, and how to keep going. She also manages the blogsite for the Women's Committee of We Stand Together / Estamos Todos Juntos, a civic engagement group on Martha's Vineyard.
View all posts by Susanna J. Sturgis →
This entry was posted in Martha's Vineyard and tagged music, religion, spirituals choir. Bookmark the permalink.