In honor of Trav’s sixth birthday, I just reread my April 27, 2008, blog about meeting him for the first time at Masasyu Alaskan Malamutes in Canandaigua, New York. We spent our first night in a motel.

A motel? With an eight-and-a-half-week-old puppy who’s never been away from home? I’d borrowed a puppy-size travel crate from a Vineyard friend and thought I was prepared. Hah. Puppy started squalling as soon as I shut the crate door. So do I wake every other guest in the motel, or do I risk puppy having an accident on the rug? 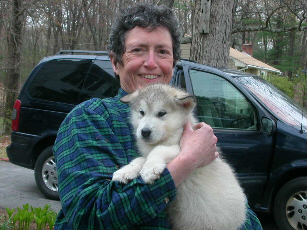 Option #2 was a no-brainer. I put down newspapers, took puppy out frequently, and crossed my fingers. Puppy didn’t have an accident on the rug.

Puppy had never been on the road before, but he was a trouper all the way home. This is one reason he became Masasyu’s Fellow Traveller.

Getting from Canandaigua to Martha’s Vineyard was the easy part. Our real journey was just beginning. Here are some pictures from his first year. 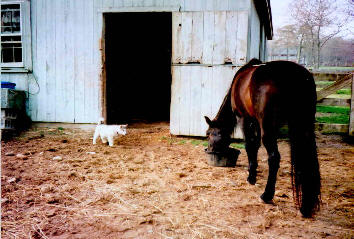 As a puppy Trav spent a lot of time at the barn. Here he is with big sister Allie at Malabar Farm. 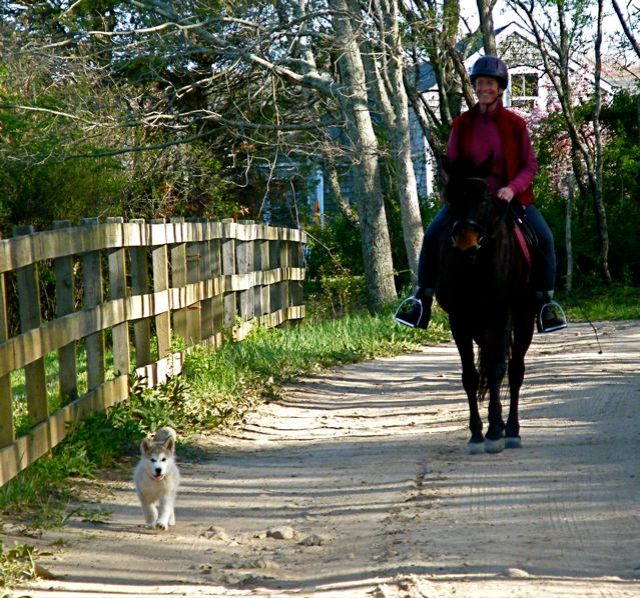 Trail riding with me and Allie 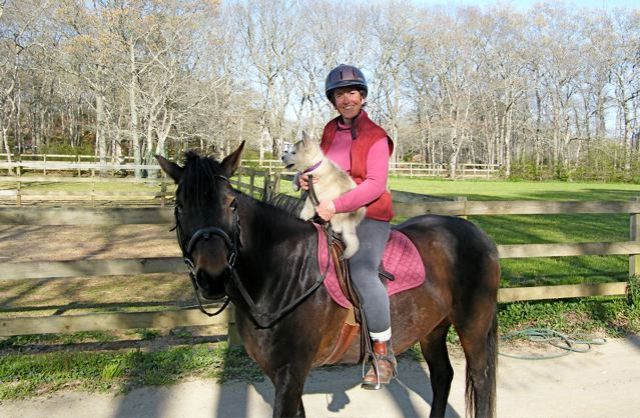 Trav’s horseback-riding career was cut short by a growth spurt.

Shaking paws, July 2008. By 4+ months the puppy was looking more and more like a dog.

Trav was a conehead after he got neutered at seven months. He thought flipping his food dish into the cone was a good game.

This was taken around his first birthday, to celebrate which I got my first digital camera. Quite a dog, isn’t he?

Susanna edits for a living, writes to survive, and has been preoccupied with electoral politics since 2016. She just started a blog about her vintage T-shirt collection: "The T-Shirt Chronicles." Her other blogs include "From the Seasonally Occupied Territories," about being a year-round resident of Martha's Vineyard, and "Write Through It," about writing, editing, and how to keep going.
View all posts by Susanna J. Sturgis →
This entry was posted in dogs and tagged Allie, change, dogs, horses, Masasyu Alaskan Malamutes, Travvy. Bookmark the permalink.

6 Responses to Travvy Is Six!