I do love January — so much progress in so little time! I spotted 20 plates this month. Not a huge haul, but not bad — and having Louisiana show up so early in the year? Wow. Louisiana and Texas look like they’re bumping butts on the map, don’t they?

An email update from the Vineyard Gazette implied that in January we recognize almost everyone we see on the road. This is hyperbole and has been for a long time. Maybe 20 years ago I’d recognize most of the people I saw in Cronig’s in January, even if I didn’t know their names. These days I’m not in Cronig’s very often, but when I am I’m lucky to recognize anybody.

Last night, though, I attended the first of a six-part series on America’s Music and I recognized at least three-quarters of the people there. Really recognized them, as in knew their names. When I stop by the Black Dog Café for breakfast or a cookie or a muffin, I usually recognize at least half the people there, and most of the rest look vaguely familiar. But when I had Thanksgiving dinner at the Harbor View, I didn’t know anyone other than the three people I went with. 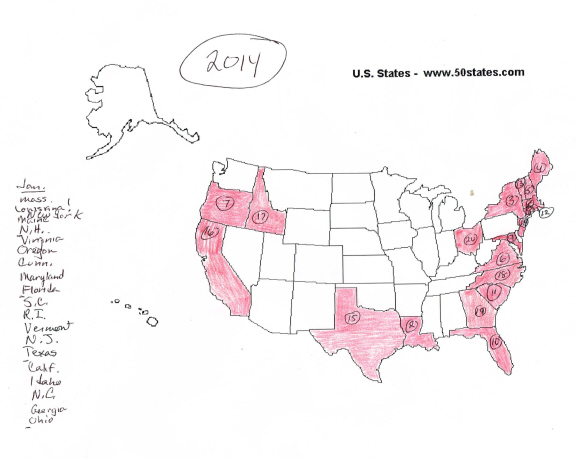