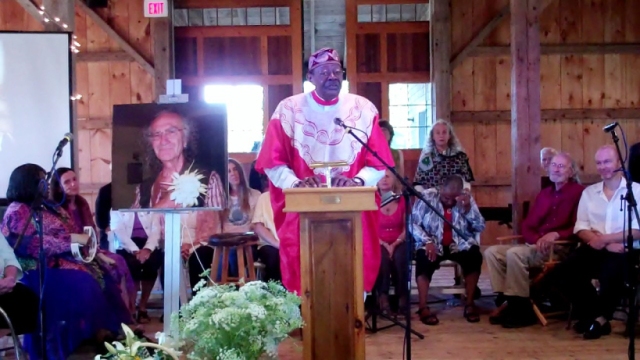 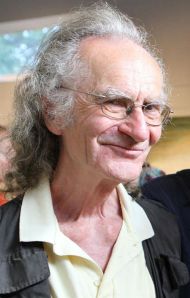 Bob Lee died suddenly on August 11. His death was a shock: he’d been in poor health for some time, but he got around, sang and drummed in the M.V. Spirituals Choir, and frequented the West Tisbury post office — which until I joined the choir last year was probably where most of our conversations took place. No one expected him to die. But die he did, swimming one bright Sunday morning in a pond he loved not far from his home.

Word spread fast. Friends flooded Bob’s Facebook timeline with memories, anecdotes, and wonderful photos. Everyone, it seemed, was connected to Bob somehow, in ways small and large, past and present.

The celebration spilled into real space and time this past Saturday at the Ag Hall, in one of those grand community potlucks that the island, and especially West Tisbury, does so well. Facebook lets you look at pictures of food, but on Saturday we got to eat it, lots of it, enough to feed the throngs who came to reminisce, sing, laugh, dance, eat, fly kites, and do any number of things that Bob would have approved of. Quite a few people swear that Bob was there, and I won’t say they’re wrong.

So after the Spirituals Choir sang, I took my gear out to my car, which was parked way the hell down Panhandle Road — did I say the place was mobbed? As I was opening the hatch door, a familiar car rolled to a halt beside me. Behind the wheel was an elected official from my town, a savvy, well-connected guy who knows his way around the island. “I thought that was you,” he said. “What’s going on?”

Which took me aback, first because I’d pretty much convinced myself that no one on Martha’s Vineyard didn’t know Bob and second because I couldn’t describe who Bob was in a pat phrase or two, and forget about conveying why vehicles filled every available nook and cranny on the Ag Hall grounds and lined Panhandle Road from the State Road intersection to where the road bends sharp left near the Janes Way gate. I tried, but what came out of my mouth didn’t begin to explain.

If you didn’t know Bob or had only a nodding acquaintance with him, his Martha’s Vineyard Times obituary will give you an idea of the range of his interests and his passionate involvement in all of them, not to mention his gift for connecting with and staying connected with people.

Back in the Ag Hall, grabbing a plate and a place in the food line, I took a more discerning look at the crowd. Most of the people I recognized fell into at least one of two overlapping groups: Vineyarders who moved here in the 1970s or were already in residence by then, and those connected to the grassroots arts scene, especially the musical part of it. The friend who passed me on Panhandle Road belongs to neither category. Some town officials and politicos do, of course, but I didn’t see all that many of either in this particular crowd.

So no, everyone wasn’t at the party, and everyone didn’t know Bob Lee. Those who did can count themselves blessed. Little Martha’s Vineyard is complex enough that nearly all generalizations about we are wrong. Maybe the only one that holds water is Everyone has something to say about the Steamship Authority.

Susanna edits for a living, writes to survive, and has been preoccupied with electoral politics since 2016. She just started a blog about her vintage T-shirt collection: "The T-Shirt Chronicles." Her other blogs include "From the Seasonally Occupied Territories," about being a year-round resident of Martha's Vineyard, and "Write Through It," about writing, editing, and how to keep going.
View all posts by Susanna J. Sturgis →
This entry was posted in Martha's Vineyard, public life and tagged Ag Hall, Bob Lee, community, music, psychic map, spirituals choir, West Tisbury. Bookmark the permalink.