You knew it, I knew it: if I’d made it to five of the six island towns in the same week, I had to go for #6 before the week was out. So this afternoon Travvy and I took a leisurely drive up-island, all the way up-island. People in Vineyard Haven and Oak Bluffs think West Tisbury is up-island. I’m here to tell you, it’s a long way from here to up-up-up-island, which is to say —

Gay Head, the smallest and furthermost of the island’s towns, changed its name to Aquinnah in 1998, but we still talk about the Gay Head Light, the Gay Head Cliffs, and the Gay Head Baptist Church. (Wikipedia, I just noticed, says Aquinnah Light and Aquinnah Cliffs. Shows how much they know.)

Travvy charmed the lighthouse keeper and several visitors by wooing, shaking paws, and generally being cute. They were impressed when I told them that he was Mr. January in the Vineyard Seadogs calendar. (Photographer Lisa Vanderhoop, who produces the calendar, lives in Aquinnah.)

There were plenty of (free) parking places, so summer hasn’t arrived in earnest yet, at least not at the Cliffs. And parked not far from Malvina Forester was a car with Arkansas plates. All in all, a very successful trip. 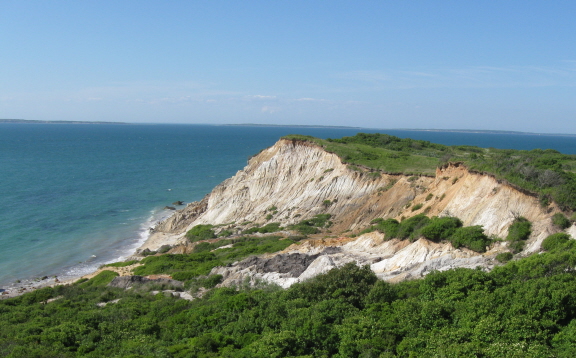 Susanna edits for a living, writes to survive, and has been preoccupied with electoral politics since 2016. She just started a blog about her vintage T-shirt collection: "The T-Shirt Chronicles." Her other blogs include "From the Seasonally Occupied Territories," about being a year-round resident of Martha's Vineyard, and "Write Through It," about writing, editing, and how to keep going.
View all posts by Susanna J. Sturgis →
This entry was posted in dogs, Martha's Vineyard and tagged Aquinnah, Gay Head, Travvy, Vineyard Seadogs. Bookmark the permalink.