I Say It’s My Birthday

Some years I take my birthday off. This year I didn’t. I’m drowning in work. I can’t afford to take a day off — but I didn’t really want to take a day off. My late winter and spring brought several big expenses, most recently Malvina Forester’s brake work, and not enough work. So having enough work is a pretty good birthday present. 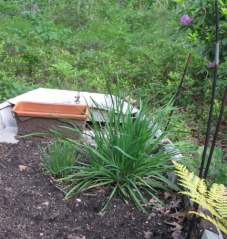 I’ve been broke enough that buying seedlings for my dinghy garden seemed like a crazy extravagance. My chives wintered over well — maybe that would be enough garden for this year?

But being swamped with work means that in another month or so there’ll be money coming in, enough that having spent 40 bucks or so for seedlings, seeds, and potting soil won’t seem extravagant at all. It might even seem chintzy.

So this afternoon, it being my birthday ‘n’ all, I took myself down to Vineyard Gardens and bought a bunch of seedlings, two cubic feet of potting soil, and a packet of basil seeds.

First step was the planter on my deck railing. Into it went two coleus — I love the way its colorful leaves catch the light at different times of day — and some Greek oregano. I hope I didn’t kill the Greek oregano teasing its tangled roots into two clumps. 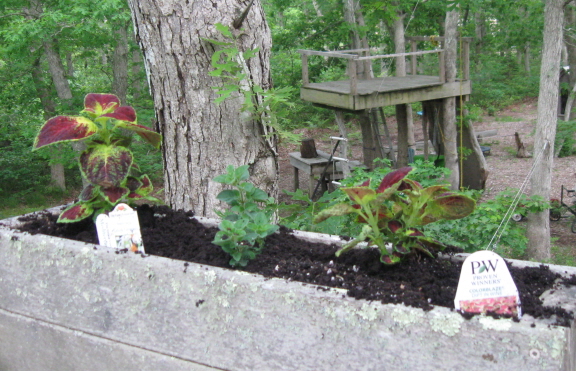 The rest of the Greek oregano, plus parsley, basil, two cherry tomato plants, and some marigolds, went into the dinghy.

There’s plenty of room left, at least until the basil seeds I’m going to plant tomorrow are big enough to transplant. What should I put there? More tomatoes, more basil, more flowers? Watch this space.

Susanna edits for a living, writes to survive, and has two blogs going on WordPress. "From the Seasonally Occupied Territories" is about being a year-round resident of Martha's Vineyard. "Write Through It" is about writing, editing, and how to keep going. She also manages the blogsite for the Women's Committee of We Stand Together / Estamos Todos Juntos, a civic engagement group on Martha's Vineyard.
View all posts by Susanna J. Sturgis →
This entry was posted in Martha's Vineyard, outdoors, work and tagged garden. Bookmark the permalink.

5 Responses to I Say It’s My Birthday