Button bowls, dusted and sorted, Vineyard buttons on the right, everything else on the left

On my recent, and still ongoing, cleaning/rearranging/excavation jag, I rediscovered my buttons. I hadn’t lost my buttons, exactly, but two bowls of them were hidden behind my old chair. I’d forgotten them. I dumped them out, thinking to dust them off, and almost immediately I was

. . . disappearing down the smoke rings of my mind
Down the foggy ruins of time, far past the frozen leaves . . . 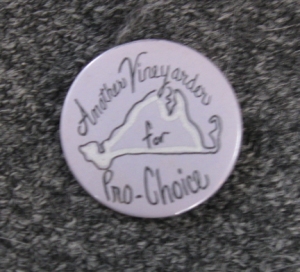 Take this one. It’s from, I’m pretty sure, the very early 1990s. The wording seemed odd then. It seems odd now: Why not just “Another Vineyarder for Choice”?

Odd wording be damned; I wore it with pride.

At this time the annual M.V. Agricultural Society Livestock Show and Fair was still being held at its original home in the center of town. The pro-choice group wanted to have an information table among the other community groups. The Ag Society said no. All political groups, it seemed, were now non grata. The Ag Society said it was a question of space. Of course we didn’t believe it. (In retrospect, they were probably right, if somewhat disingenuous: the old fairgrounds were already bursting at the seams. Stroll through the fair at its current Panhandle location, to which it moved in the mid-1990s, and you wonder how it ever squeezed into the old place.)

So pro-choice activist Hasty Runner and her mother, Faith, volunteered the use of their field, which is just up State Road from what was then the fairgrounds, as a pro-choice parking lot. For a five-buck donation — I think it was five bucks; the going rate for fair parking has been five bucks for quite a while now, but it might have been less then — you could park your car for as long as you wanted and go to the fair; all the money went to a statewide pro-choice organization. 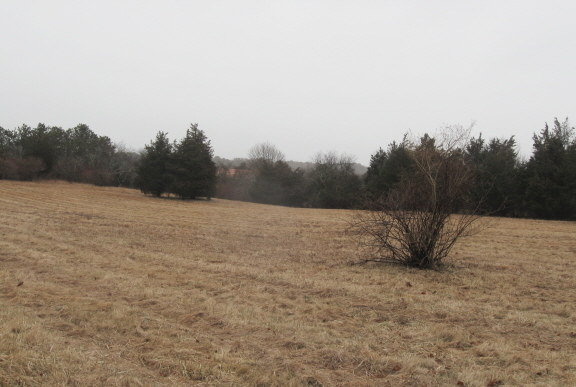 Volunteers were organized in shifts for all three days to park cars and collect money. We had a blast. As I remember, the weather was mostly good, and the mood was festive. One challenge was to make sure the vehicles parked in reasonably straight lines — not easy when they were coming and going all day and into the night, and when some were bigger than others. The humongous Suburbans and other SUVs, we quickly figured out, had to park at the far end of the field by themselves; otherwise they’d wind up taking two rows and throwing our lines out of whack. Luckily there weren’t many of them. In the years to come, they and their monster pickup cousins became ubiquitous.

We raked in much more money parking cars, maybe hundreds of times more money, than we could ever have collected at an information table. The pro-choice parking lot ran for three years, I think — if anyone’s memory is better than mine, please correct me! — until the fair moved to its current home.

Now it’s just another field by the side of the road. I pass it several times a week. I hadn’t thought about the pro-choice parking lot in years. Did it happen in another life? As I usually tell the story, feminism pretty much passed Martha’s Vineyard by. But it didn’t really. I have the button to prove it.

Susanna edits for a living, writes to survive, and has two blogs going on WordPress. "From the Seasonally Occupied Territories" is about being a year-round resident of Martha's Vineyard. "Write Through It" is about writing, editing, and how to keep going. She also manages the blogsite for the Women's Committee of We Stand Together / Estamos Todos Juntos, a civic engagement group on Martha's Vineyard.
View all posts by Susanna J. Sturgis →
This entry was posted in Martha's Vineyard, public life and tagged Ag Hall, feminism, M.V. Agricultural Society, the Fair, West Tisbury. Bookmark the permalink.