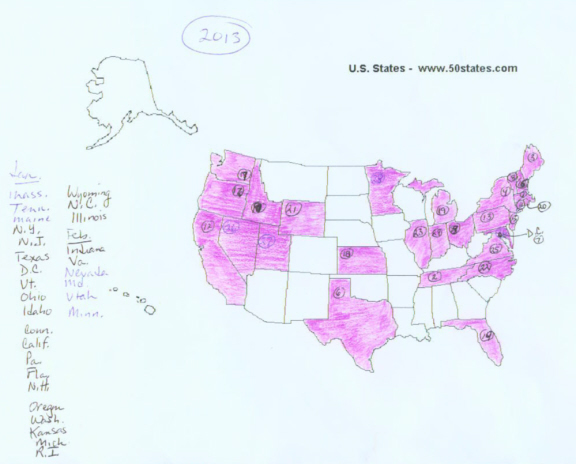 An under-average January generally gives way to an above-average February, and that was the case for 2013. The typical January tally is over 25. This year’s was 23. The usual February take is 3. This year I spotted 6: Indiana, Virginia, Nevada, Maryland, Utah, and Minnesota. Virginia and Maryland usually show up in January. This year they, or I, was a little late.

Susanna edits for a living, writes to survive, and has been preoccupied with electoral politics since 2016. She just started a blog about her vintage T-shirt collection. Her other blogs include "From the Seasonally Occupied Territories," about being a year-round resident of Martha's Vineyard, and "Write Through It," about writing, editing, and how to keep going.
View all posts by Susanna J. Sturgis →
This entry was posted in license plates and tagged license plates. Bookmark the permalink.