“Living local” is all the rage, on Martha’s Vineyard as elsewhere, and like most rages I can get pretty cynical about it. I’ve been known to call it “living lo-cal,” or Living Lite, or living without thinking too hard about how once upon a time “living local” wasn’t a sign of high-minded civic virtue; it was just what people did.

Self-portrait of ear and Cecilia’s earring

On the other hand, I think it’s sort of cool that Tom Barrett made the brown sheepskin slippers on my feet, Cecilia Minnehan the earrings in my ears, and Lisa Strachan the white porcelain butter dish that I can see from where I sit and the matching milk pitcher that I can’t see because it’s in the fridge.

Still-life with slipper and Hekate the laptop. The panda speaker wasn’t made locally, but it’s still cute.

My father gave me my green marble rolling pin. A long-ago housemate gave me the big bowl I still rise bread in. Several of my mixing bowls came from my grandmother’s house. I love it that things given me by people dead or long gone are still part of my life. I love knowing who made the things that I use or wear every day. Maybe other people make jams and jellies and mustards as good as Linda Alley’s, but I don’t know those people — and in any case I doubt it.

There is something to this living local thing. 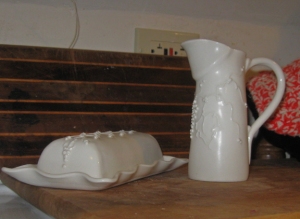 So it’s the time of year that many people give gifts to one another. Here are some local things that are part of my life. Some of them I had a hand in making. Others not, but at least I got to listen in. You could give them to yourself. You could give them to someone else. Or you could just smile to yourself knowing that they, and the people who made them, are doing neat things on Martha’s Vineyard.

I blogged about Bountiful when it appeared last summer, just in time for the 151st Martha’s Vineyard Agricultural Society Livestock Show and Fair. With text by Susan Klein and photographs by Alan Brigish and a host of anonymous photographers whose historic plates, prints, and negatives were found in attics and basements across the island, this is a beautiful and indispensable look at island history. It left me feeling, with Tennyson’s Ulysses, that

Though much is taken, much abides; and though
We are not now that strength which in old days
Moved earth and heaven; that which we are, we are;
One equal temper of heroic hearts,
Made weak by time and fate, but strong in will
To strive, to seek, to find, and not to yield.

Bountiful is available through the Ag Society’s recently revamped website.

You’d also do well to check out Martha’s Vineyard Now & Zen, a look at contemporary Martha’s Vineyard by the same team, storyteller Klein, an island native, and photographer Brigish, who came here from South Africa.

And Susan Klein’s own stories of growing up on Martha’s Vineyard in the 1950s and ’60s, Through a Ruby Window, which can be had as a book and as a recording. I recommend both. You can find them on Susan’s website. 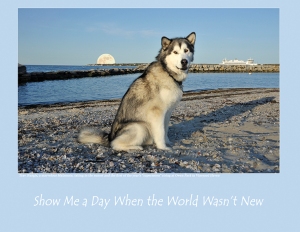 I also blogged earlier this fall about Lisa Bibko-Vanderhoop’s Vineyard Seadogs calendar — but of course! Travvy is Mr. January! The whole calendar is stunning. There’s no Vineyard seascape that can’t be improved by the presence of a dog, or, even better, several dogs.

The 2013 calendar is available at several locations on the Vineyard, among them Good Dog Goods, Alley’s, and Cronig’s. It can also be ordered online.

Finally, here’s another book I helped edit: Victoria Trumbull’s Martha’s Vineyard. If you follow Cynthia Riggs’s Martha’s Vineyard Mystery Series, you know who Victoria Trumbull is: the 92-year-old sleuth who’s the protagonist of the series — and who’s based on Cynthia’s mother, the late Dionis Coffin Riggs. This isn’t your standard-issue guidebook. It’s wonderfully idiosyncratic: Cynthia’s text incorporates allusions to the mysteries — the 11th of which, Poison Ivy, was recently published — local color, and poems by and anecdotes about Dionis, and it’s enriched by the photographs of Lynn Christoffers and maps by Stephen Wesley. If you’re not on the island (and even if you are), you can order it through Cynthia’s website.

Here ends “Giving Local,” part the first. Part the second will follow in a day or two. It’s mostly about music.

Susanna edits for a living, writes to survive, and has been preoccupied with electoral politics since 2016. She just started a blog about her vintage T-shirt collection: "The T-Shirt Chronicles." Her other blogs include "From the Seasonally Occupied Territories," about being a year-round resident of Martha's Vineyard, and "Write Through It," about writing, editing, and how to keep going.
View all posts by Susanna J. Sturgis →
This entry was posted in Martha's Vineyard and tagged Alan Brigish, Cynthia Riggs, island grown, Lisa Vanderhoop, Lynn Christoffers, Susan Klein, Travvy, Vineyard Seadogs. Bookmark the permalink.