On the agenda for last Thursday’s Martha’s Vineyard Commission (MVC) meeting was a public hearing on the MVC’s draft policy on site design and landscape. The policy aims to “[give] guidance to applicants seeking approval of a Development of Regional Impact (DRI).” If I get elected to the MVC, I’ll have an awful lot to learn, so I figured I’d better start now, just in case. I read an online copy of the draft and went.

The draft policy runs to almost 30 pages. I thought it was unwieldy. Several of the commissioners thought likewise. One said, “This isn’t a policy” and added that “for a policy it’s overkill.” Another said it was “too big.” A third found it “intimidating.” Back to the drawing board, they agreed. They decided to continue the public hearing at the MVC’s next meeting, on November 1, before which time a revised draft will be available on the website.

Two particular things struck me about the draft policy. One is that it juxtaposes environmental criteria with purely aesthetic concerns as if they all deserve equal weight. Minimizing the visual impact of parking lots, it seems, is as significant as providing for stormwater management. Specifying the sort of fences that can face public ways deserves as much attention as discouraging the use of invasive plants in landscaping. Carried to its illogical extremes, this results in the kind of capricious silliness in which regulating bodies specify what font can be used in a sign or what color in a building’s trim. Such silliness is not uncommon around here. Applicants often feel, quite justifiably, that they are being nickel-and-dimed to death, and the worst excesses keep the humor mill giggling for years. 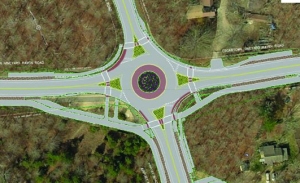 If the MVC approved this, how can it reject anything?

The other thing is that when it comes to the infamous roundabout (you knew I was going to get there, right?),  the MVC ignored just about all the concerns and recommendations in this draft policy. Reading the draft kindled long-banked fires and pretty soon smoke was coming out of my ears.

Rather than go through the whole long draft policy line by line (there are 922 lines, more or less, and nearly all have words on them), I’ll just quote the overall goal, which appears on page 5:

The goal of this policy is to ensure that the site design, landscaping, and lighting of development projects fit into their surrounding context, particularly the cultural and historical built environment, and in rural areas, the natural systems.

Of course the MVC collectively didn’t even consider the roundabout a DRI (development of regional impact) until the town of West Tisbury made a discretionary referral in the spring of 2011. (The project had been cooking since around 2003.) Oops.

Some think the roundabout is a done deal. I disagree. But even if the damn thing is built, and even if it turns out to be mankind’s greatest landscaping triumph since Central Park, the blatant inconsistency will live on, poisoning the relationship between Vineyarders and the MVC, which is supposed to be protecting our home and our interests. Why, DRI applicants will sensibly ask, are we being nickel-and-dimed by guidelines that MassDOT and the Oak Bluffs board of selectmen were allowed to blow off? 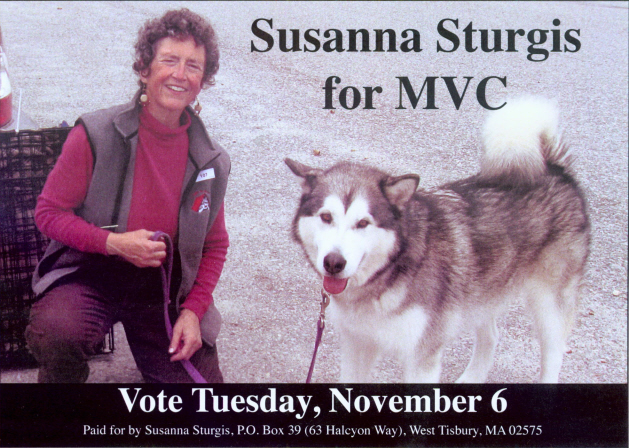 Susanna edits for a living, writes to survive, and has been preoccupied with electoral politics since 2016. She just started a blog about her vintage T-shirt collection: "The T-Shirt Chronicles." Her other blogs include "From the Seasonally Occupied Territories," about being a year-round resident of Martha's Vineyard, and "Write Through It," about writing, editing, and how to keep going.
View all posts by Susanna J. Sturgis →
This entry was posted in Martha's Vineyard, public life and tagged MVC, politics, roundabout. Bookmark the permalink.