When it comes to fall foliage, tall trees get all the attention. Hereabouts the brightest colors are often closer to the ground. I took these photos early last week on Travvy’s and my morning walk. The colors have faded some since then — or maybe it’s that with the sky overcast they don’t catch the light in the same way? (Don’t ask why it’s taken me over a week to post this. First it was deadlines, then Trav and I went off-island for the weekend — more about that later — and then it was another deadline.) 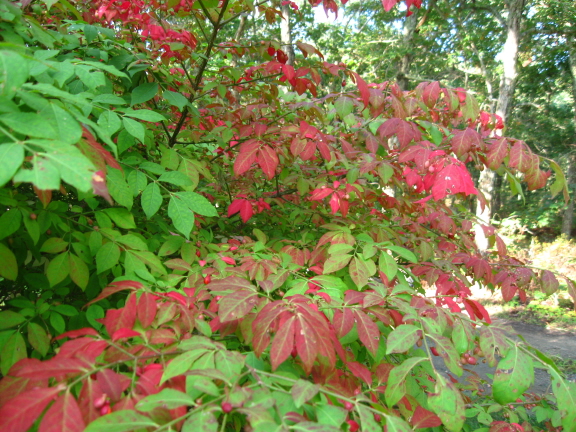 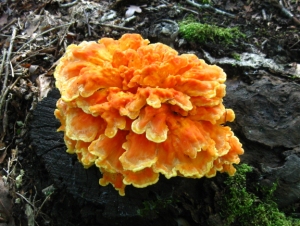 Chicken of the woods

As we head out down the driveway, the burning bush above sends us on our way.

Most of the local color is subtle — this is New England, after all. Not so this mushroom at the end of the driveway. After posting it on Facebook, I learned that it’s a chicken of the woods and that it’s edible, as long as it’s not growing on a eucalyptus. We don’t have eucalyptus on Martha’s Vineyard: this beauty was growing out of an oak stump.

Unfortunately it is no more. My neighbor was out stumping over the weekend and the mushroom got stumped in the process, much to the dismay of his wife, who was planning to cook it when it got a little bigger. 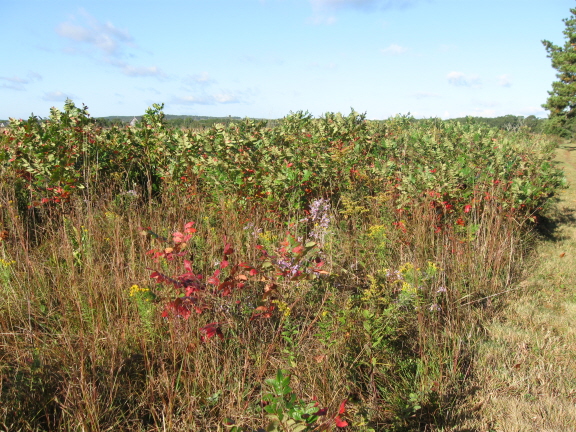 Our morning walk has several variations, but all of them take us along at least one side of the big field near Misty Meadows. 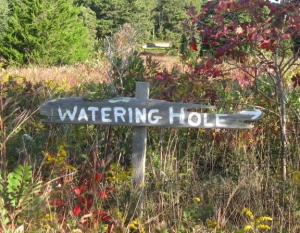 A landmark for all who walk this way. Yes, the arrow does point to a dog’s water bowl and faucet at the edge of the householders’ lawn. Our walks rarely take more than an hour, and they’re never in the heat of the day, so we don’t take advantage of the watering hole — but I’m glad to know it’s there. When the householders are out gardening or doing yardwork or sitting on their patio, we call greetings to them from the trail.

One edge of the meadow runs parallel to Old County Road.

When it comes to identifying wildflowers, I’m pretty hopeless. I’ve been saying for at least 25 years that I’m going to get myself a field guide and learn the names of the wildflowers I see every year. So far I haven’t done it. 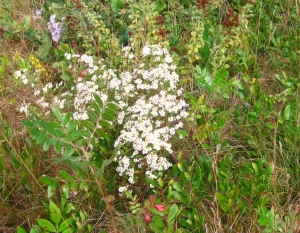 The World Wide Web is great for some things. If you know the name of something, you can find out what it looks like. If you know what it looks like, however, learning its name is a challenge. If it’s possible, I haven’t figured out how to do it. Is there an interactive website out there where I can type in “little white daisy-looking flowers on Martha’s Vineyard” and get a few possibilities to look at? (A few hours later: Just learned that Google Images may be able to help here.)

If I were a carpet weaver or a painter, I’d go nuts trying to recreate these colors and textures. Two Pembroke Welsh corgis live in that house back there. When they’re outside, they bark at Travvy. Travvy woos back at them. Next door is a black standard poodle who barks wildly as soon as she spots us and keeps barking long after we’re out of sight.

You bet I know what that is! Poison ivy is one of the most gorgeous plants in the autumn woods.

Not sure what these are either, though the milkweed’s leaves look similar, albeit smaller. (Milkweed it is. Thanks again, Tom!) When it catches the sun, their yellow is startling across a meadow of weathered green. 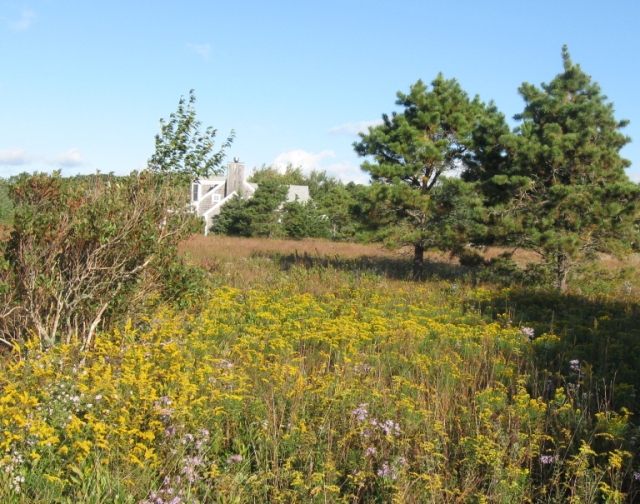 Another view from the path along the meadow

Dog on the rock

Right: Now we’re back in our driveway. Trav has already had his breakfast. Now it’s time for me to get mine: black tea and slow-cooking oatmeal.

The glacier probably brought that rock to Martha’s Vineyard, but not to its current location. I share a driveway with my neighbor/landlords. (More accurately, they share it with me.) We can go out the back way, via Pine Hill, and emerge by the West Tisbury dump: this is a handy shortcut to State Road, the West Tiz post office, and up-island Cronig’s market. Or we can take Halcyon Way to Old County Road. Persons unknown and unauthorized were using the driveway to make their own shortcuts — which would have been OK, except that coming from either direction an SUV or pickup needs to make a seven- or nine-point turn to get around the trees. This was mildly annoying, especially at night when the intruders have their headlights on. So the rock was deposited to make the maneuver even harder. I’m not sure it’s all that effective, but Travvy likes it.

Susanna edits for a living, writes to survive, and has two blogs going on WordPress. "From the Seasonally Occupied Territories" is about being a year-round resident of Martha's Vineyard. "Write Through It" is about writing, editing, and how to keep going. She also manages the blogsite for the Women's Committee of We Stand Together / Estamos Todos Juntos, a civic engagement group on Martha's Vineyard.
View all posts by Susanna J. Sturgis →
This entry was posted in Martha's Vineyard, outdoors and tagged my neighborhood, Travvy, walking, West Tisbury, wildflowers. Bookmark the permalink.