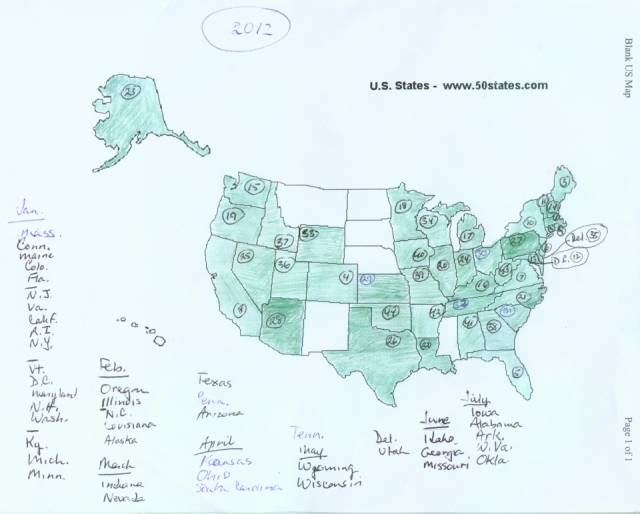 How ’bout that map, huh? July brought in several hard-to-get states. Iowa isn’t generally too tough, but Alabama, Arkansas, and Oklahoma are all good catches. West Virginia too: most years I’m SOL if I miss the family friend from Morgantown who’s usually gone by the end of June. This year I missed her but spotted another visitor from the “wild, wonderful” state.

Don Lyons, the guy who got me into this game, reports that he really and truly has seen North Dakota this year. Be still, my beating heart! For Don’s 85th birthday in the middle of the month, I made him a card with a North Dakota license plate on it. I also bought myself two items of hot-weather clothing from Deva Lifewear, which is located in North Dakota. Maybe these things will bring me luck?

A Hawaii plate passed me near the hospital the other day, but it was on the front end of the car. The rear plate, I’m pretty sure, was Massachusetts — sure enough that it wasn’t worth pulling a U-ie and chasing the car toward Oak Bluffs. For a while Massachusetts was a one-plate state, and if you got your current plate number in those years you can put anything you want on the front. I’ve seen this faux-Hawaii car before.

Susanna edits for a living, writes to survive, and has two blogs going on WordPress. "From the Seasonally Occupied Territories" is about being a year-round resident of Martha's Vineyard. "Write Through It" is about writing, editing, and how to keep going. She also manages the blogsite for the Women's Committee of We Stand Together / Estamos Todos Juntos, a civic engagement group on Martha's Vineyard.
View all posts by Susanna J. Sturgis →
This entry was posted in license plates, Martha's Vineyard and tagged license plates. Bookmark the permalink.