A week ago I blogged about “Those Signs.” Among other things, I wrote that “they’d be at home anywhere: on a suburban golf course, alongside an interstate. The ones I’ve seen so far sit uneasily on the landscape, sharp-angled against the contours of the land . . .”

A friend tipped me off to the sign at the West Tisbury library. She doesn’t like the signs, but she does like this one. So do I. Unlike the other ones I’ve seen or heard about, this sign has a conversation going with its setting. The other messages make me groan. This one makes me grin. Here it is: 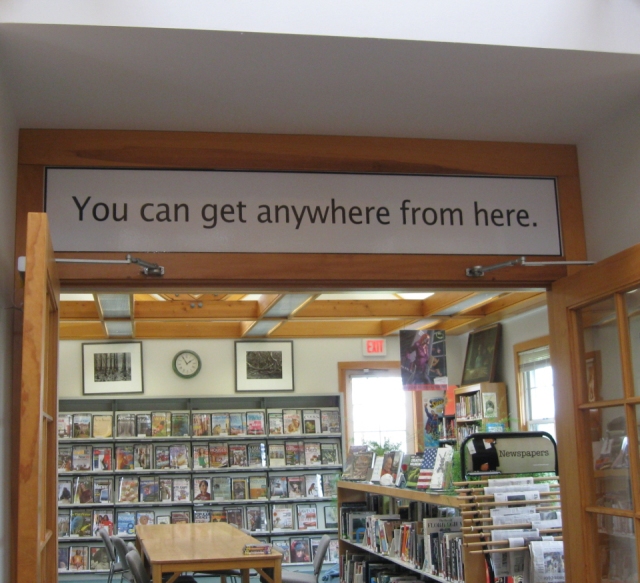 Above the entrance to the periodical room, West Tisbury library

As I left the library after taking the picture, a fellow was coming in, camera in hand. He asked me where the sign was — you know, the signs that have been in the papers? I gave directions: turn left, when you get to the main desk turn right and look up. He thanked me.

I suspect he’s on a treasure hunt, and that he’s not the only one. The signs are scheduled to come down today or tomorrow. Maybe the conversations about them will continue. I’m listening.

Susanna edits for a living, writes to survive, and has two blogs going on WordPress. "From the Seasonally Occupied Territories" is about being a year-round resident of Martha's Vineyard. "Write Through It" is about writing, editing, and how to keep going. She also manages the blogsite for the Women's Committee of We Stand Together / Estamos Todos Juntos, a civic engagement group on Martha's Vineyard.
View all posts by Susanna J. Sturgis →
This entry was posted in Martha's Vineyard and tagged arts, Julia Kidd, West Tisbury Free Public Library. Bookmark the permalink.

2 Responses to Those Signs, Again