Before he died Rhodry was very clear that I had to get another dog. So was I. After he died I was even clearer, all the more so when doglessness began to seem normal. How to find a dog? I was clueless. Rhodry was the serendipitous culmination of one coincidence after another; I never had to go looking. I put in an application at the local shelter and said I was interested in the northern breeds. I filled out the online application for the New England malamute rescue group. I joined a malamutes e-list. I sat by Rhodry’s grave and asked him to send me a dog. 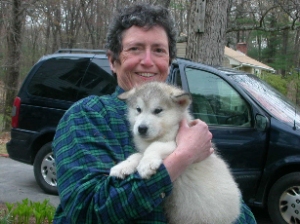 Fluffball and me on the way home, late April 2008

When I set out for Masasyu Alaskan Malamutes in Canandaigua, New York, I didn’t know who would be my puppy or what his name would be. By the time I reached my sister’s house in Stow, Massachusetts, on the way home, my new 10-pound fluffball was Fellow Traveller, Masasyu’s Fellow Traveller.

Travvy started his new life as a barn puppy. As the weeks passed, keeping an eye on him while doing chores and riding got more and more challenging. If my attention lapsed, or even if it didn’t, he’d be off to visit the Labradoodle who lived on the other side of the farm where I boarded my horse, Allie. When he was about three months old, he wandered into the paddock of a 17:2-hand Hanoverian and almost got stomped. As he grew, he started coming with Allie and me on trail rides. I’d loved trail-riding with Rhodry — but Rhodry was a mature, sensible five-year-old when I got Allie. Travvy was much younger, more impulsive, and — as he approached his first birthday — apparently possessed of a stronger prey drive. 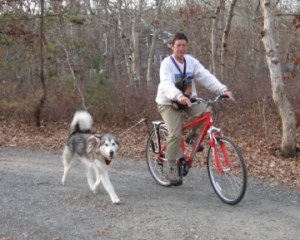 Springering: Travvy, me, and the Red Menace, fall 2009

At this point the Vineyard was still in the throes of a long-running, very public saga involving mismanaged Siberian huskies who went on chicken-killing sprees when they got loose, which was all too often. Most people can’t tell a Sibe from a malamute, and where chickens are concerned the difference between the two is not much. Northern breed dogs were being profiled. I couldn’t afford to let Travvy get into trouble. He couldn’t run loose. To give him serious exercise, I started ponying him from Allie’s back. I also bought a used bike and attached to its seat post a Springer — an ingenious invention that attaches dog to bike, absorbs almost all the dog’s pulling, and leaves the cyclist’s hands free. 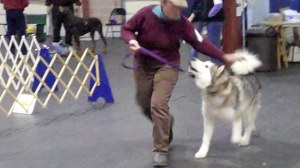 Defying all the odds, we finished our Rally Novice title in March 2010.

The mere idea of Alaskan malamutes doing any kind of obedience is enough to send dog people into gales of laughter, but Karen Ogden of Positive Rewards Dog Training was offering an intro to Rally Obedience class. It sounded interesting, so I signed us up. To say we were the least likely to succeed is to grossly understate the case. At the first class, Travvy was so over the top that he had to go to the opposite end of the venue (the indoor arena at Arrowhead Farm) before he could even begin to focus. The second class we missed because he went AWOL on a trail ride. We kept at it, and lo and behold, Trav’s impulse control started to improve and his attention span got longer. And I got hooked on dog training. In September 2009 we competed in our first Rally trial, and earned two of the required three legs on our Rally Novice title. 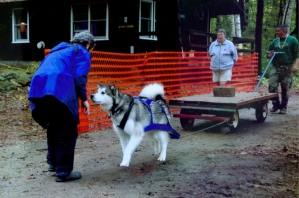 After a year of riding less and less, I sold Allie in the spring of 2010. Trav and I have continued to compete, with some success. In 2010 and 2011, we attended Camp N Pack, a wonderful weekend for dogs and their people sponsored by AMRONE, Alaskan Malamute Rescue of New England, and held at a Girl Scout camp in western Massachusetts.

Travvy didn’t fit into the life I’d made with Rhodry, but he fits very well into the life we’ve made together. So do I. Have I told you lately, Trav, that I’m glad you’re my puppy? 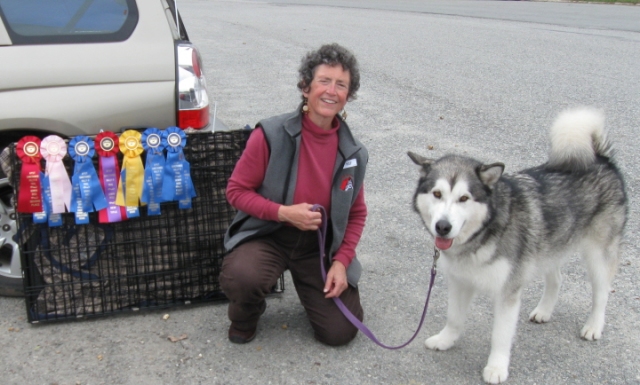 Susanna edits for a living, writes to survive, and has been preoccupied with electoral politics since 2016. She just started a blog about her vintage T-shirt collection: "The T-Shirt Chronicles." Her other blogs include "From the Seasonally Occupied Territories," about being a year-round resident of Martha's Vineyard, and "Write Through It," about writing, editing, and how to keep going.
View all posts by Susanna J. Sturgis →
This entry was posted in dogs and tagged Allie, dogs, Masasyu Alaskan Malamutes, Rally, Rhodry, Travvy. Bookmark the permalink.