Anything any Facebook junkie says about Facebook has to be taken with a few grains of salt, for the same reasons that no junkie can be trusted where junk is concerned. Everyone’s the hero of her own story, and most of the time that includes me.

Rather than rhapsodize boringly about the wonders of Facebook, I’m just going to list four specific things I really like about it. Four specifically Martha’s Vineyard things: this is a Vineyard blog after all. 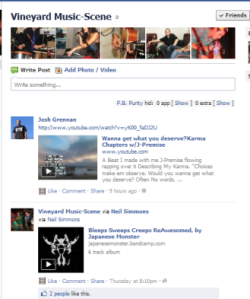 One of the biggest surprises after I finally signed up with Facebook just over a year ago was that I found myself going to more local events, readings, concerts, artisans’ fairs, and the like. Vineyard Music-Scene is one of the reasons. It’s a bulletin board for all things musical on Martha’s Vineyard. Musicians and bands announce upcoming gigs and soon-to-be-released albums. Looking for a session player or a percussionist to sit in? Need a string trio to perform at a wedding, or a pianist at a gallery opening? Post it here.  Vineyard Music-Scene has close to 5,000 friends on and off the island. It’s exhilarating to see just how much music is being made on Martha’s Vineyard these days, and to hear how good it is.

Martha’s Vineyard where are you

It’s not true that everybody knows everybody on Martha’s Vineyard, though if you’ve been around a while you’ll recognize at least the names of many others who’ve been around a comparable while. I knew Martina Mastromonaco was an EMT and the Chilmark beach superintendent. I had no idea that she’s a fabulous photographer. She posts photographs; we try to identify the location. Some are easy, some aren’t, and sometimes you just admire the image and don’t worry about where it was taken.

Martina has an eclectic eye: she loves seascapes and moonscapes, and old farmhouses, and the way rope twists around a post, or a moody sky ripples in window glass, or license plate holders pile up at a service station. I’m forever catching new facets of familiar places, and being reminded of places I rarely go, like Lucy Vincent Beach.

What makes Martha’s Vineyard where are you even cooler is that often an image will set off recollections about the place or people it depicts; many of the page’s regular contributors have been around forever and know a lot. They post photos too.

One of the most popular features of the Martha’s Vineyard Times is the Bargain Box, where the classifieds are free as long as what you’re selling costs $100 or less and you don’t need more than 20 words to describe it. MV Stuff 4 Sale is even better: there’s no limit on either cost or words, you can post pictures, and people can ask questions about whatever you’re selling. It’s like a virtual yard sale. Clothing, shoes, furniture, computers and small electronics, cars, musical instruments . . .

Musician and massage therapist Kim Hilliard started the group just a few weeks ago. It’s already got 500 members, and if one of them knows someone who might be interested in what you’re selling, they’ll pass the word along. If you’re looking for something, you can post that too. 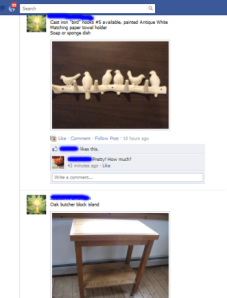 My workspace, always messy, had been getting messier. My desk was clearly part of the problem: it consists of a big piece of varnished particle board on top of two two-drawer file cabinets; my scanner sat on a small end table off to the left, and my keyboard and mouse on the table that I also use to knead bread on. Bulky, messy, u-g-l-y — to the point where I was thinking about getting a computer desk from Staples. Where spending money is concerned I can procrastinate forever, and since the project would clearly involve overhauling that end of my studio apartment I was fully prepared to procrastinate even longer.

So a week ago Thursday the photo of a solid, two-piece computer desk was posted to MV Stuff 4 Sale. It was love at first sight, but it took me two days to admit it, mainly because buying it would mean I had to get serious about making my workspace workable. I came to my senses. We moved it in yesterday (read on for this part of the story). I’m thrilled.

This group spun off from MV Stuff 4 Sale because quite a few Vineyarders were posting job or help wanted notices there. I no longer drive a pickup, and my Forester couldn’t accommodate even one piece of my new desk, so I posted a “trucker wanted” notice. Katrina Nevin, who started the group, passed the word along to a friend of hers. We made a deal, and yesterday we moved the desk.

Susanna edits for a living, writes to survive, and has two blogs going on WordPress. "From the Seasonally Occupied Territories" is about being a year-round resident of Martha's Vineyard. "Write Through It" is about writing, editing, and how to keep going. She also manages the blogsite for the Women's Committee of We Stand Together / Estamos Todos Juntos, a civic engagement group on Martha's Vineyard.
View all posts by Susanna J. Sturgis →
This entry was posted in Martha's Vineyard, music, technology and tagged community, cyberspace, Facebook, music, photography, year-rounders. Bookmark the permalink.