Most of my time on Martha’s Vineyard I’ve lived in year-round neighborhoods. Mind you, with a couple of exceptions these wouldn’t be recognized as “neighborhoods” by most urban and suburban dwellers, not least because the dwellings are too far apart. What I mean is that we live in close enough proximity to recognize each other’s cars, kids, and pets. We know each other’s houses well enough to notice when something’s changed, and we know each other well enough to ask the occasional favor or borrow a couple of eggs.

“Year-round” means that you see the same people on the road summer and winter, spring and fall; nearly all the houses are occupied 12 months of the year. On our walks, Trav and I pass two that are seasonally occupied, but in both cases the owners make occasional short visits during the off-season and there are plenty of year-rounders in the vicinity to keep an eye out.

Recently circumstances took Trav and me to a subdivision where the opposite is true: almost none of the houses are occupied 12 months of the year. Only two of several dozen are occupied right now, in mid-December. It felt like walking around a small town all of whose inhabitants had vanished into another dimension, leaving only their houses and an infrequent car behind.

In my teenage and young adult years I spent plenty of time on Tisbury Great Pond. Virtually none of those houses — generally known as “camps” — were occupied in the winter, and for good reason: they weren’t insulated, and the only heat sources were sunlight and a fireplace. The houses in this subdivision are houses, real houses, with electricity, phone, cable, and all the appliances you’d expect in an affluent suburb. They’re big enough to comfortably house a family of six whose members can’t stand to be in each other’s presence.

In a neighborhood, neighbors keep an eye out for anything out of sync. An unfamiliar vehicle in someone’s driveway? A window open that shouldn’t be? Someone doesn’t leave at the usual time in the morning or come home at the expected hour at night? In this expansive neighborhood, there are no neighbors. Trav and I strolled at will across lawns and around houses. I peered through windows and looked under decks. I had a plausible reason for what I was doing, but no one asked me to explain myself.

In the absence of neighbors, security is provided electronically. Maybe Travvy and I now appear in the video annals of a local police department or security company. Maybe someone’s decided that no bona fide security threat would be casing the joint with an Alaskan malamute in tow. 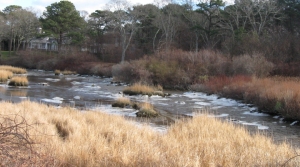 In my early years as a year-round Vineyard resident, I was amazed by the sight of snow on beaches. It had never occurred to me to wonder what the summer beaches I knew so well looked like when I wasn’t there. Winter after winter I’d go back to Lambert’s Cove Beach to marvel at the glittering patterns made by wave action under semi-frozen saltwater. The subdivision I visited features several ponds, and at least a dozen ducks weren’t heeding the “no swimming” signs. The temperature had dipped to the very low teens the night before, skimming some ponds with ice and framing the biggest one with frozen undulations. I’m here and you’re not, I thought.

The kayaks in winter

In my prowling, I spotted precious few clues to the personalities of the absent people. The blocky houses are different from one another, but they look to have been made from the same kit. Many have first- or second-story decks accessed by sliding doors, ideal for summer entertaining, and sure enough, I saw several propane-powered grills either on the decks or stowed underneath. Quite a few of the seasonal householders do, it seems, like to take to the water. Sengekontacket Pond is close by and reachable by water by a shallow-draft craft. Kayaks fit the bill, and indeed I saw several, hibernating under decks or shrubbery or elevated on wooden storage frames. Winter colors are subtle. The kayaks glowed with the bright hues of a warmer season.

Water view, with no viewers

When I moved to Martha’s Vineyard in 1985, I knew exactly one year-round resident. Within two years the balance had shifted dramatically: I still knew all the summer visitors I had known when I was one among them, but now they were far outnumbered by the year-rounders. A gentle but strong current slowly pulled me away from most of them. They were only here between June and September, the months when I was working my butt off and living in a friend’s house till I could find my next winter rental. Wandering through this deserted subdivision, I guessed that most of the people who come every summer to live in these houses hang out with each other and go to each other’s parties. What year-rounders they know are probably tradesfolk, caretakers, and housecleaners, and they probably don’t know where or how those tradesfolk, caretakers, and housecleaners live. They don’t know that I was sauntering through their neighborhood, or why.

Looking toward Sengekontacket Pond. On the far side of that is Beach Road, and just beyond that is Nantucket Sound.

Susanna edits for a living, writes to survive, and has been preoccupied with electoral politics since 2016. She just started a blog about her vintage T-shirt collection: "The T-Shirt Chronicles." Her other blogs include "From the Seasonally Occupied Territories," about being a year-round resident of Martha's Vineyard, and "Write Through It," about writing, editing, and how to keep going.
View all posts by Susanna J. Sturgis →
This entry was posted in Martha's Vineyard, tourism and tagged Hidden Cove, psychic map, Sengekontacket, summer people, Travvy, year-rounders. Bookmark the permalink.