Coming soon to an intersection near you? 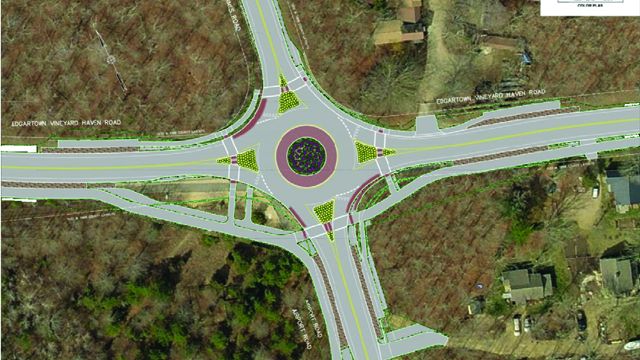 In yet another lesson in the banality of local politics, the Martha’s Vineyard Commission on Thursday night voted 7–6 to approve the roundabout, with a few conditions most of which had to do with landscaping, bus stops, and safety for bicyclists and pedestrians.

The vote was closer than I expected. Linda Sibley of West Tisbury and Ned Orleans of Tisbury, both of whom had been talking as if they were going to vote yes, voted no. The commission was deadlocked at 6–6. Chris Murphy, the current MVC chair, broke the tie by voting yes “in support of the Oak Bluffs selectmen.” This was no surprise. Neither was the smirk on his face when he cast his vote. From the beginning he’s been consistently supportive of the project and hostile to those who opposed it.

My mind is so boggled it can’t boggle anymore. I don’t get it: Why can’t these people have a real discussion? Time and time again I wanted to be crouching on the floor in the middle of their horseshoe-shaped table, prompting them with facts, insights, and questions raised in the public hearings. But what about this? Have you forgotten that? Just for a moment forget about the damn experts and think about what you know about this intersection and about Martha’s Vineyard.

Noticed in passing: Once upon a time, the big selling point for the roundabout was safety. Opponents kept asking just how dangerous the four-way stop was (answer: not very), and how much the roundabout could be expected to improve it (answer: not much). At this meeting, the safety issue was being pretty much blown off. Safety for motorists, that is. The MVC did seem to be uneasy about the safety implications for bicyclists and pedestrians, with good reason.

Hapless John Breckinridge didn’t like the “helicopter pad aspect” of the project, but since he’s from Oak Bluffs he apparently felt obliged to present a united front with his town’s board of selectmen. He did, however, propose a string of conditions to do with landscaping. I think he said that landscaping, including the use of “native plants,” is key to maintaining island character. Yeah, right: the island character of a helicopter pad. He also tried to make it a condition that his town, the one that’s foisted this project off on the rest of us, wouldn’t have to cover the cost of anything the state didn’t pay for.

Trip Barnes’s video was mentioned, and the fact that the attempt to show it at a previous meeting came to nothing for lack of adequate equipment. Pro-roundabouters were ridiculing the whole premise that big trucks would have any trouble with the roundabout, then Christina Brown said that “when someone submits testimony, we don’t argue with them; we listen to them.” So the video was shown, the revised version that includes Craig Hockmeyer providing a bicyclist’s perspective. At the end Doug Sederholm said that if this were a court of law, the video wouldn’t have been admissible because it didn’t deal with the facts. Pot calls kettle black, I say: Sederholm and his co-religionists have managed to discount any facts that threatened to interfere with their lust for roundabout.

Every time Brian Smith spoke, he addressed the issue and he made sense. He had done some research of his own on the matter of bicycle safety. I was seriously impressed by this guy. He’s the selectmen’s appointee from West Tisbury, the town I currently live in.

Oak Bluffs selectman Greg Coogan sprawled in a chair by the door, twitching. Was he having a bad dream? stroking out? Fascinated, I kept sneaking glances in his direction. In September 2006 the Oak Bluffs board of selectmen voted 3–2 to approve the roundabout project. Of the three who voted for it, Coogan is the only one still in office. If he’s ever made a mistake in his life, he doesn’t know it.

MVC meetings are supposed to end by 10 p.m. After that motions to extend the meeting had to be made, seconded, and passed. It was, if I recall correctly, in the third of these 15-minute extensions that Christina Brown pointed out that the commission had to consider the “benefits and detriments” of the project as a whole. Up to this point, the commission had spent the overwhelming majority of its time dicking around with the roundabout’s specs. At long last, for maybe 15 minutes, they talked about the pros and cons.

Finally they took the vote. 7–6. Better than I expected, but it still sucks.

Still — you know what? I don’t believe this thing is going to be built. Short of legal action, for which we don’t have the money, I don’t see how it’s going to be stopped, but I still don’t think we’re going to have a roundabout where Barnes Road meets the Edgartown–Vineyard Haven Road. As far as I can tell, most Vineyarders don’t want the damn thing. Whether we have the guts to stop it is open to question.

Susanna edits for a living, writes to survive, and has been preoccupied with electoral politics since 2016. She just started a blog about her vintage T-shirt collection: "The T-Shirt Chronicles." Her other blogs include "From the Seasonally Occupied Territories," about being a year-round resident of Martha's Vineyard, and "Write Through It," about writing, editing, and how to keep going.
View all posts by Susanna J. Sturgis →
This entry was posted in Martha's Vineyard and tagged MVC, Oak Bluffs, roundabout. Bookmark the permalink.