This roundabout thing is getting to us — us being the valiant souls who have been fighting to get Oak Bluffs officials and the Martha’s Vineyard Commission to listen to reason — to listen, period. Having been involved only a scant couple of months, I’m already tearing my hair out. Several of my colleagues have been at it since 2004, facrissakes. It’s a wonder they haven’t committed themselves en masse to a loony bin.

Viewed from a certain angle, however, Martha’s Vineyard is a loony bin. As Milton Mazer noted more than 35 years ago in People and Predicaments, the Vineyard has a “high tolerance for deviance.” So maybe they haven’t committed themselves because they’re already here.

Anyway, at the last meeting of the small ad hoc “roundabout roundtable,” Trip Barnes, trucker and inveterate showman, said he was going to produce a TV show. Yeah, right, thought my rational self. And that’s going to accomplish — what?

But it’s rational self that’s been tearing her hair out: When you marshal your facts and prepare one coherent argument after another and the people you’re trying to persuade act as if they haven’t heard a word you said, what do you do next? 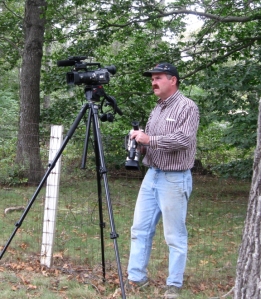 Why not a TV show? We’ve got a local-access cable channel, MVTV. People actually watch it. MVTV rents out camera people at reasonable rates. Trip’s idea was to combine some man/woman-in-the-street interviews with footage of one of his big trucks trying to maneuver around circles the size of the proposed roundabout. I was, as usual, late getting to the scene of the shoot — at the blinker intersection, of course, just outside the gate at Tilton Rentall — but here’s a preview of coming attractions. 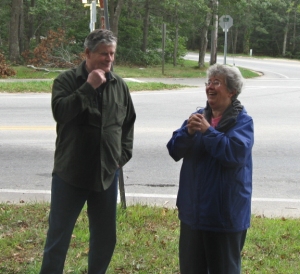 Sandra Lippens is the proprietor at Tilton’s, which occupies one of the four corners at the blinker intersection. Tilton’s rents all sorts of stuff but specializes in the big outdoor parties that are so popular during the Vineyard summer. From place settings to tents to rollaway beds and cribs for overflow guests — you can find it at Tilton Rentall. Customers and employees are in and out of the Tilton property during business hours, and occasionally after hours, seven days a week. The roundabout proponents have been chronically vague about how much their plan will encroach on the Tilton Rentall property, and on how exactly employees and customers will get in and out. Sandra has been in the forefront of the Stop the Roundabout battle from the very beginning, which was around 2004.

The really cool thing, though, was watching Trip pull a U-turn on the Edgartown–Vineyard Haven Road. 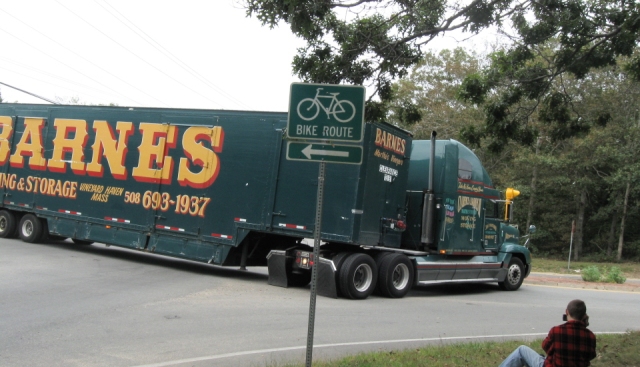 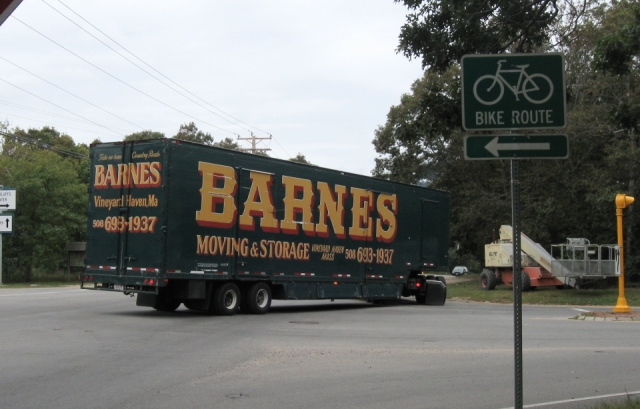 Note in the last photo the cherry picker parked off to the right. Peter Goodale, from Goodale’s up the road, brought it down so the cameraman could take aerial photos of Trip’s truck circling the intersection.

Trip and crew then went into Vineyard Haven. He’d earlier ascertained that the little circle near the SSA (Steamship Authority) terminal, the one where the VTA (Vineyard Transit Authority) and Park & Ride buses stop to let off and pick up passengers, was about the size of the proposed roundabout. Proponents assure us that big trucks, like the 62-footers that deliver groceries to the Stop & Shop in Edgartown, will have no trouble negotiating the roundabout. Many truckers have misgivings about this. I hear Trip and truck had to go up on the curb to get around the circle, but I’m sorry to say I missed the photo op: I was back at Tilton’s kibitzing with my colleagues.

Can’t wait to see it on TV!

Susanna edits for a living, writes to survive, and has been preoccupied with electoral politics since 2016. She just started a blog about her vintage T-shirt collection: "The T-Shirt Chronicles." Her other blogs include "From the Seasonally Occupied Territories," about being a year-round resident of Martha's Vineyard, and "Write Through It," about writing, editing, and how to keep going.
View all posts by Susanna J. Sturgis →
This entry was posted in Martha's Vineyard and tagged MVC, Oak Bluffs, roundabout, Tilton Rentall, Trip Barnes. Bookmark the permalink.