When times get rough, year-round Vineyarders usually come through for each other in a big way. It’s one of the things I love most about us, and the reason that despite all the place’s aggravations I’d think at least five times before I moved anywhere else.

Tonight I went to a benefit spaghetti dinner and silent auction to benefit Lisa Ben David Scannell, who fractured her pelvis in a bad horseback riding accident in early June. Many, many of us on Martha’s Vineyard are either self-employed, seasonally employed, or employed by very small companies, which is to say that even if we have adequate health insurance, we probably aren’t covered at all for lost work time. On any given weekend, all year round but especially in the off-season, there’s usually a benefit for someone who’s been injured or diagnosed with a serious illness, or for a family hit by a house fire or other misfortune.

I came to know and admire Lisa during my decade of horse ownership. Lisa was also the much-admired mentor of the young woman who guided Allie and me through our first years together, so we’re in the same line of knowledge transmission — I’m sort of her grandkid, even though she’s quite a few years younger than I am. I’m largely out of the Vineyard horse world now, but when I heard about the benefit, of course I was going to go.

The benefit was held at the PA, the Portuguese-American Club, officially the Holy Ghost Association. When I got there, about a half hour after the event officially started, the large dirt parking lot was packed. The PA is a major nexus of island life: an active, down-to-earth social club (not “social network”) with more than 1,100 members and the host for so many parties and benefits that many non-members are regular visitors.

Spaghetti with sauce and abundant meatballs was served in the low-ceilinged lower-level room, and if you still had room for dessert, the cake and cookie selection was formidable. Many ate at the rows of tables; others carried their plates up the main level, where the silent auction lined the walls and the PA’s cash bar served all comers of legal drinking age. Plenty of those in attendance were well below it — young enough, in some cases, to find toddling upright a challenge. The age range probably spanned at least eighty years, not atypical for a large island gathering. Having been out of the horse loop for over a year now, I had a good time catching up with people I hadn’t seen in at least that long, as well as those I see more often. One of the latter was TA,  a friend who’s got two miniature horses in her backyard and whose horsegirl daughter, an incoming high school senior, I’ve known since she was nine. Since TA is also my hairdresser, I was mightily relieved when she said my unruly curls were looking good and don’t bother to get them cut till September.

The auction offered an impressive array of items, some distinctively horsey but most of interest to anyone. Browsing, wondering how much money I had in my checkbook, I noted the connections between the donors and the island horse world. Cindy Bonnell, for instance, crafter of the exquisite lap quilt, is a horsewoman herself, as is her grown daughter. Ken Vincent donated a small painting — his wife is a horsewoman, and his sister-in-law’s a vet. The offerings included jewelry, all kinds of gift certificates, a wool vest from Allen Farm, and even two pygmy goats from Native Earth Teaching Farm, who went for $200 to someone who will take very good care of them. Bidding was brisk. I scored a freeform wampum pendant for a very reasonable price. 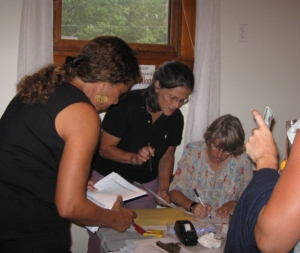 Keeping track of who owes what

Volunteers busily tallied up the auction results and accepted cash, checks, and credit cards. It looked as though enough was raised to enable Lisa to focus on her physical recovery without worrying (too much) about paying the bills. If you couldn’t be there, contributions are still welcome. Make checks payable to You’ve Got a Friend and send them to You’ve Got A Friend, Inc., benefit Lisa Scannell, P.O. Box 1317, West Tisbury, MA 02575.

Susanna edits for a living, writes to survive, and has two blogs going on WordPress. "From the Seasonally Occupied Territories" is about being a year-round resident of Martha's Vineyard. "Write Through It" is about writing, editing, and how to keep going. She also manages the blogsite for the Women's Committee of We Stand Together / Estamos Todos Juntos, a civic engagement group on Martha's Vineyard.
View all posts by Susanna J. Sturgis →
This entry was posted in Martha's Vineyard and tagged Cindy Bonnell, horses, Ken Vincent, Lisa Ben David Scannell, PA Club. Bookmark the permalink.