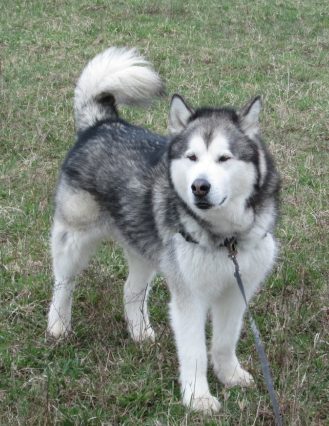 My Travvy is gone.

It all happened so fast. Last Wednesday morning he was his own self, trotting along on our walk, sometimes sniffing the bushes to “see” who or what had passed by recently, other times heeling smartly and looking up at me as if to say Aren’t I good? How about a cookie?

As usual, I had a fistful of mini biscuits in one vest pocket, string cheese in the other, and a “bait bag” of mixed Charlee Bear treats and turkey dog pieces slung over one shoulder. So I’d give him one.

Early Wednesday evening he was flagging so noticeably that I aborted our walk not long after we set out. I was concerned but not worried. We’d been here before, or so I thought. Rocky Mountain spotted fever comes on suddenly like this. Get him started on doxycycline and within a day or two he’d be his own self again.

Not this time. The next morning he was too weak to get into the car, even with my help, and I wasn’t strong enough to lift him. So our vet and her assistant made a house call. Trav lay in the leaves next to the car, unnaturally calm while she checked his vital signs and drew blood.

He didn’t have a fever; his temperature was too low. The real wallop was his red blood cell count, which our vet said was “scary low.” His profound weakness was due to extreme anemia. Her thought was that this might be due to internal bleeding, and that could be related to a tumor. We agreed that x-rays were in order. Since her x-ray machine was on the blink, she made a 2 p.m. appointment for us at Animal Health Care, the better-equipped but still small vet hospital at the airport. Before they left, they helped me lift Trav into Malvina Forester’s cargo bay.

He showed no desire or capacity to go anywhere. This was as unsettling as the disastrous bloodwork. If you know Trav, or malamutes in general, you do not leave them unattended in unsecured spaces: if there is mischief to be found, they will find it, and if there’s none to be found, they will create it. I went in for a bit but then came out and sat with Travvy, stroking him and scratching his ears and trying to read a back issue of the American Prospect.

The x-rays showed a mass on the spleen. We had them read by a radiologist, who confirmed my vet’s reading: they couldn’t be certain, but what they saw was consistent with the low temperature, the very low platelet count, and Trav’s extreme weakness and apathy. We were most likely dealing with a splenic tumor and related internal bleeding.

Here’s where the realities of living on an island kick in. “Most likely” suggests a degree of uncertainty, but certainty comes at a price. The Vineyard supports several veterinary practices these days, but no fully equipped veterinary hospitals. For specialized care and treatment we have to go off-island. “As soon as you get on the boat,” said my vet, “it’s $5,000.”

Not only was certainty expensive, it came with a poor prognosis. If the tumor was malignant, it had probably already metastasized, so surgery even if successful would likely buy us only a few months. Trav turned 11 last month. Our apartment is on the second floor, and I’d just demonstrated to myself that I couldn’t lift his 80-pound weight without help. The prospect of transporting him off-island in his current condition was almost unthinkable.

I decided to bring him home for the night, with evening and morning doses of doxycycline and prednisone on the (very) off chance that this might be tick-related. Getting him up my outside stairs was a chore for both of us. I supported his hind end with a sweatshirt sling and he climbed with his forepaws. At the top of the stairs he thunked himself down, exhausted. I gave him two doxy, wrapped up in peanut butter, and was encouraged that he managed to eat them.

In the morning he seemed a little more alert. He even got up on all fours to drink some water. He still had no appetite, but he did eat a few kibbles that I scattered in front of him. Maybe, maybe . . . ?

No. Getting him down the stairs was as hard as getting him up. He collapsed at the bottom. With the sling I encouraged him to get up and try to walk far enough to pee. He couldn’t do it. I called my vet and said “It’s time to go.” She had two appointments but would be free at 10:30. I said we’d be there; she offered to come to the house again. I said “We’ll see.”

I’m not sure how I finally got him into the car. At one point I gave up and called the vet to ask her to come over. The line was busy, so I tried again. This time we made it.

All the way down Old County Road I played Dave Carter’s “When I Go,” the song that got me through Rhodry’s passing 11 years ago.

Travvy passed peacefully in the back of Malvina Forester, with whom we’d travelled so many miles together. There’s more to the story, but I’ll leave it for later. That fistful of biscuits is still in the pocket of my vest.

Spring, spirit dancer, nimble and thin, I will leap like coyote when I go
Tireless entrancer, lend me your skin, I will run like the gray wolf when I go

I will climb the rise at daybreak, I will kiss the sky at noon
raise my yearning voice at midnight to my mother in the moon
I will make the lay of long defeat and draw the chorus slow
I’ll send this message down the wire and hope that someone wise is listening when I go

And should you glimpse my wandering form out on the borderline
between death and resurrection and the council of the pines
do not worry for my comfort, do not sorrow for me so
all your diamond tears will rise up and adorn the sky beside me when I go

Susanna edits for a living, writes to survive, and has two blogs going on WordPress. "From the Seasonally Occupied Territories" is about being a year-round resident of Martha's Vineyard. "Write Through It" is about writing, editing, and how to keep going. She also manages the blogsite for the Women's Committee of We Stand Together / Estamos Todos Juntos, a civic engagement group on Martha's Vineyard.
View all posts by Susanna J. Sturgis →
This entry was posted in dogs, home, music and tagged Dave Carter, death, Malvina Forester, Rhodry, Travvy, walking. Bookmark the permalink.

25 Responses to In Memoriam