Across the country and around the world yesterday, women and our allies rallied to celebrate International Women’s Day.

In some places, women refrained from work and/or shopping in order to demonstrate women’s significance to the community and the economy. On the Vineyard we decided to make ourselves visible in another way: by rallying at Five Corners in the late afternoon, 4 to 5:30 p.m. Five Corners is probably the single most visible place on the island.

Morning rain gave way to bright if brisk afternoon sunshine. An estimated 70 turned out. As at the demonstrations and marches on January 21, day 1 of the Trump administration, the signs were plentiful, creative, and inspirational.

The rally was organized by the Women’s Committee of We Stand Together / Estamos Todos Juntos, a multi-faceted grassroots action group born out of the shock and concern that greeted last November’s election results. Its first public action was the successful rally at Waban Park (Dennis Alley Park) on November 19. Since then it was gone on to do really stellar work promoting safety in the schools and around the island for those threatened by the new administration’s anti-immigrant policies. It also co-sponsored, with the M.V. Hebrew Center, the hugely successful “legislative forum” with State Rep. Dylan Fernandes and State Sen. Julian Cyr on February 5.

To find out more and to get involved, WST/ETJ meets at 1 p.m. every Sunday at the M.V. Public Charter School. It also has a page on (where else?) Facebook. 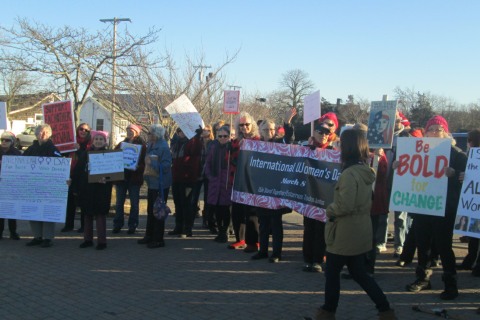 “Be Bold for Change” was a theme of the day: note the sign on the right-hand side of the lower photo. The crowd was spirited and convivial, as Vineyard gatherings tend to be. We greeted friends, introduced ourselves to people we didn’t know (some of whom we knew on Facebook but hadn’t met in person), and went around reading each other’s signs.

I picked up a few tips about effective demo signage.

Being a novice sign-maker with minimal graphic skills, I balked at the price of foamboard when I stopped by Edu Comp, the computer, office, and art supply store in Vineyard Haven. What if I had to fumble my way through several drafts to make a decent sign? As it turned out, I did it in one take and now have three sheets of posterboard left over. Foamboard is definitely in my future.

Pussy hat by Sarah Vail, words by Judy Grahn, sign by me, and photo by Albert Fischer.

Here’s me peeking out from behind my sign, courtesy of Albert Fischer, a man of several trades, including photography, who also lives in my neighborhood. For a close-up of the sign, read on.

Thinking about what to put on my sign, I thought immediately of Judy Grahn’s Common Woman poems, especially the one that includes the lines “the common woman is as common as the best of bread / and will rise / and will become strong . . .”

I’m a bread baker after all, right? So this is what I came up with. The rose was added at the suggestion of a Facebook friend, in homage to “bread and roses,” a slogan that originated in the Lawrence (Mass.) textile strike of 1912. 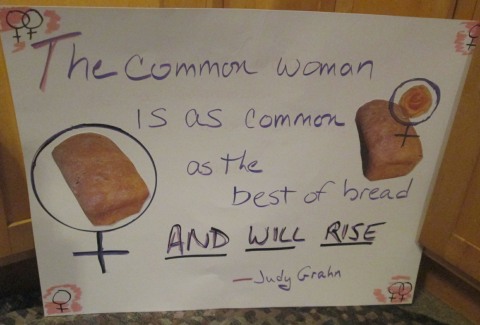 Susanna edits for a living, writes to survive, and has been preoccupied with electoral politics since 2016. She just started a blog about her vintage T-shirt collection: "The T-Shirt Chronicles." Her other blogs include "From the Seasonally Occupied Territories," about being a year-round resident of Martha's Vineyard, and "Write Through It," about writing, editing, and how to keep going.
View all posts by Susanna J. Sturgis →
This entry was posted in Martha's Vineyard, public life and tagged election 2016, Facebook, feminism, Five Corners, politics, We Stand Together, women. Bookmark the permalink.

8 Responses to Women Stand Together