Fall Comes to the Clothesline

If Blake could see “a world in a grain of sand and heaven in a wild flower,” then why can’t I trace the turning of the seasons on my clothesline? Why not indeed. Here goes. 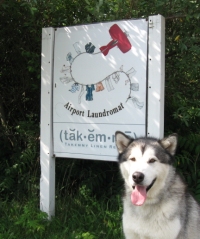 Thursday dawned bright and sunny and I was almost out of underwear, so by 8:30 Travvy and I were on the road to the Airport Laundromat. “Bright and sunny” is essential because I hang my wash out. This is less because I’m environmentally correct and more because I’m pig-headed and cheap: the dryers at the laundromat charge 25 cents for 4 minutes and it takes a lot of quarters to get clothes anywhere close to dry. Especially jeans.

Speaking of jeans — here’s Thursday’s laundry line. Pop quiz: How can you tell for sure that this is early fall and not, say, midsummer?

See the black jeans at the far right? This is the first appearance of jeans on the line since June. To their left are five pairs of shorts. I live in shorts all summer. A major perk of this freelance editor’s life is getting to wear whatever I want. In summer it’s mostly shorts and T-shirts.

My T-shirt collection has been out of control for a long time. Admitting I was powerless over T-shirts hasn’t helped: I keep acquiring more.

The T-shirts at right include one from the 1997 Ag Fair, one from a 1990 display of the AIDS Quilt in Boston, one from WisCon 22 (1998),  one bought at a Fred Eaglesmith concert at Katharine Cornell Theatre in the mid-2000s, and one from Moonstone Bookcellars, a science fiction bookshop that I think was defunct by the time I left D.C. in 1985.

The leftmost T-shirts, one red and one gray, both have long sleeves. This is another sure sign of fall, and the absence of turtlenecks says it’s still early fall. As fall wears on, shorts and T-shirts will disappear from the line and be replaced by jeans and turtlenecks. There will be turtlenecks in the next laundry, I promise. I do not have nearly as many turtlenecks as I do T-shirts, but I have enough. In cool weather you can wear the same shirt for days on end. In summer, when you take something off, it’s too clammy to put on again, so into the hamper (a repurposed wastebasket) it goes. 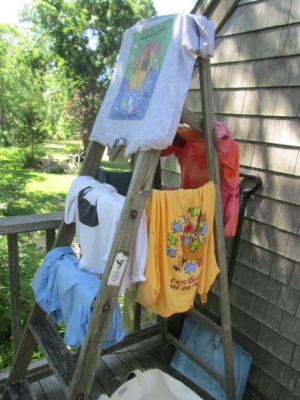 So how can you tell that the photo at left was from a summer laundry?

This is a little tricky. Usually I head for the laundromat when I’m almost out of underwear: about every three weeks. On July 22, three weeks’ worth of T-shirts didn’t fit on the line. I usually don’t have to press my step ladder into service.

Travvy accompanies me to the laundromat, of course, even in hot weather. We do our morning walk around the county airport — not for nothing is it called the Airport Laundromat — and the adjacent business park.

Trav likes wooing at the taxis in waiting in front of the terminal, and if there are people sitting on the benches outside, so much the better. For him the high point is probably the sights, sounds, and smells of the boarding kennel at Animal Health Care. Sometimes we even spot another dog out for a walk.

Susanna edits for a living, writes to survive, and has been preoccupied with electoral politics since 2016. She just started a blog about her vintage T-shirt collection: "The T-Shirt Chronicles." Her other blogs include "From the Seasonally Occupied Territories," about being a year-round resident of Martha's Vineyard, and "Write Through It," about writing, editing, and how to keep going.
View all posts by Susanna J. Sturgis →
This entry was posted in home and tagged clothes, ecology, laundromat, laundry, summer, T-shirts. Bookmark the permalink.

8 Responses to Fall Comes to the Clothesline