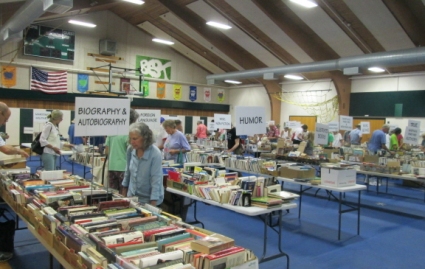 Readers who don’t want to be led into temptation should avoid the book sale.

In most aspects of life the cost of things imposes restraint, but at the book sale cost isn’t likely to slow a person down much, even if she’s on a tight budget. On the first two days of the sale, most books cost only a dollar or two. On the third day everything is half price. On the fourth and final day, everything is free, but nearly everybody pays at least something, because the sale benefits the library’s Friends group.You could probably fill the back seat of a car for $25, and the bed of a small pickup for less than $50.

In the weeks preceding the sale, volunteers sort a year’s worth of donated books into categories: art books, kids’ books, biography & autobiography, history, military affairs, general fiction, romance, and so on. Fortunately the categories are general, and books that are both/and or neither/nor sometimes wind up in unexpected places. In this age of online ordering, browsing is an endangered pastime. The West Tisbury library book sale is a browser’s heaven.

So, come to think of it, is the library itself, although lately I’ve been making good use of the CLAMS (Cape Libraries Automated Materials Sharing) website, whereby I can find out which libraries have the book or DVD I’m looking for and have it appear a couple of days later at my town’s library.

As usual, I didn’t go looking for any book in particular. I was prepared to be delighted, and I was. Books I didn’t know I was looking for caught my eye. I bought several of them. So did books that have shaped my view of the world. I bought a couple of them too, Audre Lorde’s Zami and Susan Griffin’s Woman and Nature, even though they’re already on my shelves: when the right person comes along, I’ll pass them on. 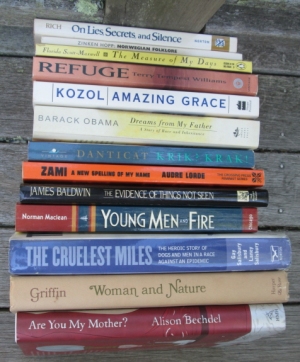 My own copy of Terry Tempest Williams’s Refuge looks like it was left out in the rain (it probably was), so I was happy to score a clean copy for all of 50 cents.

My copy of Adrienne Rich’s essay collection On Lies, Secrets, and Silence is in three pieces from repeated rereadings and consultations, but it’s also well annotated with my own marginalia so I won’t be retiring it any time soon. My new copy might save the old from further deterioration — or I might pass it on too, to the right person.

The skinny book just under it in my pile is Norwegian Folklore. I bought it partly because I was so taken with Norway when I visited Oslo in December 2010, and as an editor I’ve had several Norwegian clients since then; and partly because it was published in Britain in 1961, following British punctuation conventions, and that kind of stuff intrigues me.

Norman Maclean’s Young Men and Fire blew me away when I read it in the early 1990s, not long after it was published. It was also responsible for introducing me to the work of the great Canadian singer-songwriter James Keelaghan: when I first heard his song “Cold Missouri Waters” on the radio, probably in the late ’90s, I knew it was about the Mann Gulch fire of 1949. I’ve been a Keelaghan fan ever since, and I’ve never had my own copy of the book.

I hesitated over Jonathan Kozol’s Amazing Grace, which is about race, racism, and inner-city education. Death at an Early Age, about the same topics, opened my eyes big-time when I was still in high school. Why the hesitation? Amazing Grace was published in 1996, and despite the optimism expressed in the back-cover blurbs, things have gotten worse since then. You can be braver than that, I told myself, and put it in my bag.

I recently read Ta-Nehisi Coates’s new book, Between the World and Me (one of those rare books that you really should drop everything and read), and even got to hear him speak in Chilmark last Friday (more about that in a future blog post), so James Baldwin — a major influence on Coates — has been on my mind a lot. The Evidence of Things Not Seen caught my eye. Not only had I never read it, the title invoked something that’s preoccupied me for most of my adult life: how we can look at things and not see them, and how not-seeing is a faculty we cultivate half-consciously to protect ourselves from things we can’t afford to see.

Barack Obama’s Dreams from My Father has been on my to-read list for a while. Edwidge Danticat’s Krik? Krak! and Alison Bechdel’s Are You My Mother? weren’t on the list, but they are now. Ditto Florida Scott-Maxwell’s The Measure of My Days. Its topic, age and aging, is hot right now, but this was first published in the late 1960s, when we boomers (so I’m told) were busily not trusting anyone over 30. Now most of us are seeing our 50s in the rearview mirror. One great thing about books is that, if you’re lucky, they’ll hang around till you’re ready to read them. 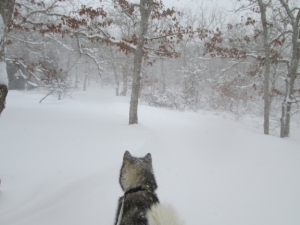 This is as close as Travvy will ever get to racing across the tundra.

The real outlier in my book stack is The Cruelest Miles. It’s about the serum run to Nome, Alaska, in 1925, which inspired the Iditarod sled-dog race. I knew diddly about the Iditarod and nothing about the 1925 serum run before I got mixed up with malamutes. Everyone mixed up with malamutes has at least a passing acquaintance with both, and now I’m surprised when most of the people around me know nothing about either.

Most of us, come to think of it, live in several worlds at once. And there were gateways to dozens more at the West Tisbury library’s annual book sale. It’s over for this year, so you’ll have to wait till late July 2016 for the next one. Meanwhile, you can do your adventuring at your town’s library.

Susanna edits for a living, writes to survive, and has two blogs going on WordPress. "From the Seasonally Occupied Territories" is about being a year-round resident of Martha's Vineyard. "Write Through It" is about writing, editing, and how to keep going. She also manages the blogsite for the Women's Committee of We Stand Together / Estamos Todos Juntos, a civic engagement group on Martha's Vineyard.
View all posts by Susanna J. Sturgis →
This entry was posted in home, writing and tagged books, dogs, feminism, race, summer, walking, West Tisbury Free Public Library, West Tisbury School. Bookmark the permalink.