It’s changeover weekend — the 30th anniversary of my arrival on Martha’s Vineyard to take a year off. Ha ha ha. I’d saved enough money to live for a year and to buy my first PC — a Leading Edge Model D, in case you’re wondering, with a 10 MB hard drive, an Epson LX-80 dot-matrix printer, and a copy of WordPerfect 4.1.

When the summer people cleared out that first year, I was on my own. I knew exactly one year-round resident. I didn’t know all that many summer people either, and most of those I did know were connected in some way to Tisbury Great Pond. For most of the previous decade, I’d been up to my eyeballs in D.C.’s feminist community. For a week in mid-spring and two or three weeks in late summer, I’d run away to my family’s camp on Deep Bottom Cove. What I wanted was solitude, not society.

That first winter I mostly did what I’d come here to do: write. But slowly I started poking around, learning the ropes, finding jobs . . . That year stretched into two, then three. I started putting down roots: Wintertide Coffeehouse, the Martha’s Vineyard Times, the island theater scene, and a women’s group that met every couple of weeks. 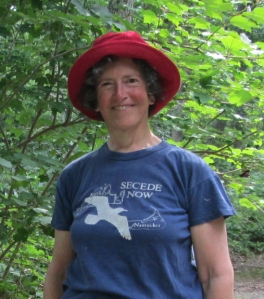 Pretty soon nearly all the people I knew and hung out with lived here year-round. Quite a few hadn’t been here much longer than I had. We were free agents at the same time, so we fell easily into each other’s orbits. Eventually we’d settle into our various networks, based on work, or interests, or town, or some combination thereof, but we’d remain part of the same cohort, shaped by whatever was going on island-wise when we were new and impressionable.

If a fortune-teller had told me 30 years ago that I’d still be here 30 years later, I would have laughed. Or maybe I would have run. I used to say (ad nauseam) that I didn’t know if moving here was the smartest thing I’d ever done or the stupidest. Then I decided that yeah, moving here was pretty smart and pretty brave.

Staying here? That I’m not sure about. I think I’d be writing more and probably better if I lived among people to whom writing really mattered, as I did in my D.C. days. But I know this place better than I’ve ever known or ever will know anywhere else. My feet are in the mud of this place and that’s where my words come from.

So the jury’s still out on that one. At the moment I have nowhere to go, no money to get there, and a great reluctance to start over again anywhere. And I’m still here.

Susanna edits for a living, writes to survive, and has been preoccupied with electoral politics since 2016. She just started a blog about her vintage T-shirt collection: "The T-Shirt Chronicles." Her other blogs include "From the Seasonally Occupied Territories," about being a year-round resident of Martha's Vineyard, and "Write Through It," about writing, editing, and how to keep going.
View all posts by Susanna J. Sturgis →
This entry was posted in Martha's Vineyard, musing, writing and tagged change, computers, summer people, writing, year-rounders. Bookmark the permalink.