Leominster, Massachusetts, proclaim the signs on the interstate, is PIONEER PLASTICS CITY and BIRTHPLACE OF JOHNNY APPLESEED. How could anyone not love that juxtaposition?

Johnny Appleseed, né John Chapman, didn’t just plant seeds. He started apple-tree nurseries and supervised them as business concerns. In those frontier days, apples were valued less for pies and more for hard cider and applejack. Surely Johnny A. presided this afternoon as my neighbors invited all and sundry to an old-fashioned cider pressing. This is meant to be an annual event, but 2011 and 2012 were crappy apple years so it didn’t happen.

To everyone’s huge relief, 2013 has been apples, apples, everywhere. People brought apples, they brought kids and dogs, they brought food to share and jars to take the cider home in. They also brought their muscles. Neighbor David’s cider press is the old-fashioned kind. The mangler and the press depend on human power.

Human power we had a-plenty, to pick through and chop the apples, mangle them into juicy chunks, then press the chunks into that precious russet liquid.

Sorting and chopping apples, fun for all ages

When I was a little kid, a Scots fellow ran a farmstand about a half mile up the road. His name was Mr. Barton, and he sold cider in gallon glass jugs. There was a deposit on the jug, and I recall pulling several empties behind me in my little red wagon, all the way to Mr. Barton’s. I got to keep the money — what was it, a nickel or a dime? Can’t remember. Mr. Barton said I was so thrifty I’d surely still have that money when I was 50.

Travvy watches from the deck

I couldn’t imagine 50. I think Mr. Barton was older than my parents. Maybe he was 50.

The cider got fizzy and hard if it hung around long enough, but I don’t think I ever got tipsy on it. Pasteurized cider that doesn’t get hard has been a disappointment ever since. 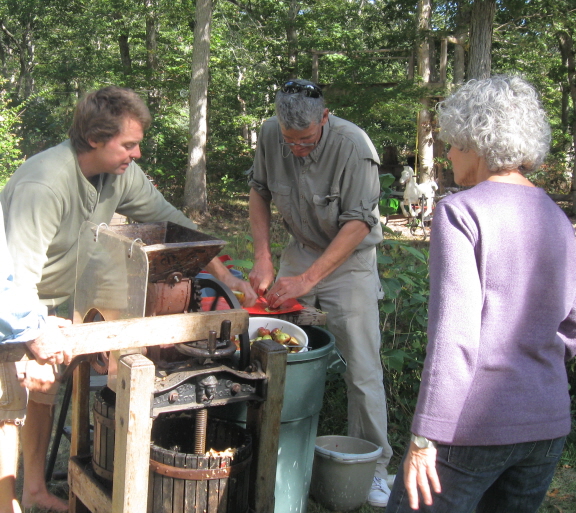 Susanna edits for a living, writes to survive, and has two blogs going on WordPress. "From the Seasonally Occupied Territories" is about being a year-round resident of Martha's Vineyard. "Write Through It" is about writing, editing, and how to keep going. She also manages the blogsite for the Women's Committee of We Stand Together / Estamos Todos Juntos, a civic engagement group on Martha's Vineyard.
View all posts by Susanna J. Sturgis →
This entry was posted in Martha's Vineyard, outdoors and tagged my neighborhood. Bookmark the permalink.